A few days in the Cascades 2 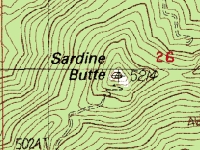 We camped where the sun would hit the van early. My coffee brewed, we drove to the Sardine Butte (5,214 feet) trailhead. The road was not only uncleared but outright abandoned. The trail itself being short, we didn’t object. Sour cherry overhung the roadbed, and the air was charged with the scent of their flowers. Wednesday’s cortisone shot helped my knee, but I still found myself carrying on a running dialogue. “How ya doing knee?” “Not great, but maybe I can hold out if it’s not too much farther. Just spare me any lateral pressure lest I collapse.” Other times, it would say, “I’ve had enough. We will both pay dearly if we continue.” I would respond, “Be patient—I’ll walk carefully.”

After our descent, we read at the edge of a quarry. The sun was too warm, and the shade too cold so, like the Indians who once followed the seasons up and down these mountains, we migrated back and forth. Oregon boxwood was in bloom, its small purplish brown flowers remarkably beautiful to those who take the time to notice small things.

Later, we drove to the Grasshopper Mtn trailhead, and camped in a quarry with a view. We hiked the road for an hour and a half, but saved the summit for tomorrow. My knee was hurting, and I reflected that this year marks the first time that I am limited by what I can do rather than by what I want to do. I am not a person who will bear disability well. In fact, I don’t aspire to bear disability well. When I become too old or infirm to function halfway normally, I always thought I would have someone drive me to a remote wilderness where I could take my pills, drink my whisky, and fire my gun. Last night, I read that older people’s organs can be successfully implanted, and I reluctantly decided that I should do myself in at the door of a hospital.

I was thinking about this intensely while feeling hopeless about my knee, and it moved ever so slightly in the direction of taking over my thoughts. I remembered Hemingway trying to throw himself into an airplane propeller before blowing his head off with a shotgun. I want suicide to be a means to maintain dignity rather than the frantic act of a desperate man.
Posted by Snowbrush No comments: