I see that I just lost two long-term and devoutly religious followers, presumably due to my response to Just_because_today following my last post. I would have softened that response had I done as I often do, which is to go away and get myself into a better mood after writing something but before publishing it. I didn't though, and rewriting such things after they're published is of questionable benefit to those who have already received my first response in their email.

My goal in writing posts about controversial topics is not simply to preach to the choir. It is also to promote understanding among those who disagree with me. I am painfully aware that such people might very well hang in there—however tenuously—through several posts on a subject, and then leave because I expressed myself poorly in just one sentence in the response column. This leaves me feeling as if I'm walking on eggshells.

I'm sure some of you will wonder why the hell I even bother, and you might advise me to write whatever I please and let the chips fall where they may. My answer is that I find it far more interesting and constructive to communicate in a way that is true to my best thinking and that causes no more offense than I can avoid. It's a challenge that I mostly enjoy and from which I derive tremendous benefit, but because I work so very hard at it, I naturally feel badly when I fail. Of course, I also recognize that losing followers is inevitable. We all do it no matter what we write or how well we write it.

I would just ask those of you who disagree with me to cut me as much slack as you can. I am quite possibly familiar with your orientation in regard to religion, at least, because I have walked on both sides of the fence, but odds are that you know little if anything about mine. To this end, my next post on the subject won't contain rational arguments but personal experiences.
Posted by Snowbrush 32 comments:

Does God exist? Why I think the answer is no. 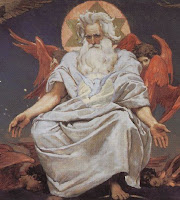 If God does not exist, where did the universe come from?

It came from previously existing matter and energy in what’s called the Big Bang. Now, let me ask you, if God does exist, where did God come from?

God is eternal. This is part of what it means to be God.

But there is also the problem of design. No machine that we can create is nearly so complicated as the human body, yet if you found so much as a watch on a deserted beach, you would know that someone HAD to have created it. Yet, you look at your own body, and insist that it just happened.

I don’t believe my body “just happened.” I believe it is the product of eons of organic evolution by natural selection. We can actually see organic natural selection in process and in the geological record, yet no one has found the least evidence that watches evolve through natural selection. Indeed, this is how we know that a found watch was created.

Does it not worry you that, even if you are right, it would be morally disastrous for society if everyone embraced atheism?

If atheists are immoral, why are there far more of them in universities than in prisons (93% of National Academy of Science members are atheists versus one-fifth of 1% of federal prison inmates), and why are those times and places where religion had its greatest influence infamous for ignorance and cruelty?

Even so, it would seem at least plausible that the fear of eternal punishment would lead many people to behave better than they otherwise would.

I am unaware of any evidence to support the belief that vast numbers of people would suddenly go out and commit crimes were they to become atheists. In fact, I don’t know of even one person who was ever harmed in the name of atheism. It’s the people who act in God’s name that scare me. Look at the Middle East today, and you will get a pretty good idea of how Christians behaved for most of their 2,000-year history.

But why wouldn’t atheists be more likely to behave badly?

They would risk being sent to prison for one thing. I also suspect that much of our morality evolved right alongside our other characteristics. For example, I would be astounded to learn that many of us harbor a secret desire to hit people over the head and steal their money. Whenever someone tells me that the only thing that keeps us all from running amuck is that we’re afraid of hell, I wonder if he’s telling me that he would run amuck if he wasn’t afraid of hell. If he is, then I’m glad he’s afraid. As for most people, I think it is their nature to behave well more often than not. Unfortunately, it’s bad behavior that makes the news. Can you imagine a newscaster saying, “937,000 Americans let another motorist change lanes in heavy traffic today”?

If God does not exist, why do so many people believe in him?

People generally believe whatever they were taught from their earliest childhood. This is why most Americans are Christians and most Indians are Hindus.

But if most people in every part of the world have always believed in God, doesn’t that in itself prove his existence?

Prior to the blossoming of scientific knowledge, a belief in God wasn’t logically justified, but it was readily understandable. Now that science has explained many of nature’s more obvious mysteries, I suspect that there are more atheists. However, people’s belief in God goes beyond an attempt to understand nature. It also offers emotional comfort in time of sickness, death, or other loss, and this is why it is harder to give up than, for example, the belief that the sun revolves around the earth.

Even so, science can’t explain everything.

That is true. Maybe someday it can, but I doubt it.

Doesn’t this leave the door open to a belief in God?

“God did it,” has always been what people said about a phenomenon that they didn’t understand. Take lightning, for example. Now that we know that lightning is caused by the attraction between positive and negative electrical charges, we give that as the answer when a child asks what causes lightning. If everyone who came before us had settled for “God did it” as an explanation for natural phenomena, we would know little more than we did thousands of years ago.

No, but neither can I prove that invisible Martians don’t inhabit my clothes dryer or that my schnauzer doesn’t speak German when he’s alone with other schnauzers. The person who claims that something is true is the one who is obligated to prove it.

If there was no God, there could be no guarantee of justice. People could do horrible things and get away with them.

If there is a God, there can still be no justice. Take the story of Job. His family was killed, his wealth was taken away, and his body was afflicted with boils. His family and wealth were later replaced, and his body was made whole again. Do you imagine that this made up for the injustice he suffered? The only way that justice could really be served would be for injustice to never exist.

You spoke of the emotional comfort that a belief in God brings. Do you not feel a lack of this in your own life?

Yes. Not all atheists do, but I do. Believers often speak of belief as if it were a choice, but I see no evidence that this is true. Certainly, it has not been true in my own life. I grew up believing, and I struggled desperately to hold onto my belief when it began to slip away at age eleven or twelve. But no matter how much comfort I thought it would bring me, I was unable to accept with my heart that which seemed absurd to my mind.

Without God, for what possible purpose do any of us exist?

Without God, there can be no ordained purpose. This is not to say that our lives can have no purpose but that it is up to us to give them a purpose.

Yes, but any purpose we find will be transitory.

This is true, but then our lives and the lives of all those for whom we might do good are also transitory. This means that whatever good I do can be extremely beneficial when measured by the scale of human, animal, or even plant life. It also means that the evil I do can be extremely harmful. I know of no stronger argument for doing good than that our lives are but a flicker against the darkness of eternity.
Posted by Snowbrush 96 comments: