How to Die in Oregon 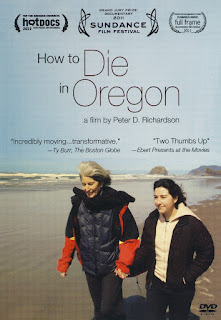 In 1997, Oregon became the first American state—and the third place anywhere—to legalize physician assisted dying.* Since then, eight other states and the District of Columbia have followed. The title of this post is the title of a documentary about the Oregon law. Frontline's The Suicide Plan, a related documentary, concerns assisted suicide in places where it's either illegal or a person doesn't qualify under current law. For example, the Oregon law requires that death be expected within six months and that the patient be able to take the required medication without assistance, the result being that some terminal people kill themselves before they wish, and that non-terminal people are excluded regardless of the severity of their condition.

While the American Medical Association and various handicapped rights groups oppose assisted dying (I was pleased to learn that my own doctor supports it), the bulk of the opposition comes from religious groups and is based upon the following: (1) God allows suffering in order to ennoble the afflicted and their caregivers, and (2) God alone can create life, so God alone must decide when to end life. Given their second argument, evangelical Christianity's military hawkishness and support for the death penalty is at best paradoxical, as is the fact that, this year alone, several states in America's so-called Bible Belt have passed laws to either end or severely restrict abortion and birth control, while also restricting financial assistance to poor families.

My own, very liberal, denomination, the Episcopal Church opposes assisted dying based upon the opinion of its General Convention that Christ, had he thought to address the issue, would have opposed it. I doubt that the church's position carries weight even among its own members, and I maintain that anyone who attempts to contribute to the public dialogue on the basis of authoritarian religious pronouncements has nothing of value to contribute to the public dialogue. "God said it; I believe it; and that settles it," only settles doubts regarding the speaker's intellectual earnestness.


But what of the slippery slope argument, the claim that assisted dying today will lead to outright euthanasia tomorrow? I certainly hope so. Under the Oregon law, if I fall victim to Alzheimer's, I will be too mentally compromised to kill myself by the time my life expectancy is within the six month limit, which means that I will be obliged to end my life early, while alone, and by means that are violent or degrading. Other sufferers—from ALS for example—might retain their mental faculties but be unable to raise the glass to their mouths or swallow its contents. It would therefore take an enormous weight off the minds of many if the law permitted them to have help in dying or, where necessary, to outline in advance the conditions under which they would wish to be euthanized.

But why choose death rather than palliative care? (1) Not all pain can be relieved by narcotics, and some conditions cause excruciating pain for which palliative drugs are completely ineffective unless they are given in such high doses that the patient is rendered unconscious. For example, I was once told that I had Chronic Regional Pain Disease, a condition so horrifically painful that the patient must literally choose between suicide and insanity. (2) No drug can take away the misery and humiliation of having to have one's ass wiped, of needing to be bathed by others, of being too wretched to experience pleasure, and of losing all hope but the hope of a death that cannot come soon enough. (3) In America, the government will only pay for a person's long-term medical care after that person has nothing left to spend, and I, for one, have not spent my life saving only to leave my wife bankrupt so that I might prolong a nightmarish existence that is no longer worthy of the name life.

For those who, despite the things I just listed, continue to "say yes to life," I leave it to them to live, but how dare they deny me the right to die in a peaceful, timely, and dignified manner in the presence of my loved ones! Yet what rankles me most is not their arrogance but that they justify their arrogance by invoking the name of God without a smidgen of evidence to support that invocation.

It is no coincidence that all of the states (plus Washington D.C.) that have passed assisted dying laws are heavily Democratic and secular. The following list of Death with Dignity states*** includes the dates the laws took effect—the Maine law will become active in September. I'm confident that the day will come when the only states that lack such laws will be those of the Bible Belt, a reactionary region that never fails to go kicking and screaming behind the rest of the nation when it comes to the expansion of human rights.


Finally, for my beloved Aussies who constitute the bulk of my active readership, I was pleased to learn that your state of Victoria has recently enacted a "Dying with Dignity" law.****


* The Death with Dignity lobby opposes the word suicide, so I will use their preferred terminology out of respect for those who have worked so hard to bring the laws about.