Why she turned out like she did, I just don't know 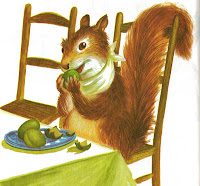 My pet name for Peggy is Fluffy after a squirrel that was in a Little Golden Book that my aunt got me when I was four. I personally hated the book and loathed the squirrel (I wanted to cut its tail off and hang it from a car antenna), and I even told Peggy this, but she said I had damned well better call her Fluffy (she says it reminds her of how cute she is), so naturally I call her Fluffy in order to make her shut-up already. If she’s looking the other way when I say it, I sneer at the back of her head in order to prove that I’m not some little woozy-man who’s going to let a woman push him around. I have to be careful that she’s not looking at me in a mirror when I sneer because she often stares at me through mirrors as if she thinks I’m too stupid to notice. It’s like she can never let me out of her sight. I don’t think she trusts me, probably because she has a guilty conscience. You’re no doubt wondering how she got this way. I'll tell you what I know, but it's not much.

After Peggy and I got married in 1971, everything went great for about two weeks. After those two weeks, I noticed that Peggy would still do what I told her to do, but that she wasn’t doing it with any enthusiasm. At first, I figured she was just sick, but I didn’t say anything to her about her sickness because it weakens a woman to give her sympathy—or appreciation, for that matter. It also encourages her to pretend she’s sick when she’s not sick in order to get out of work and to force you to treat her nice. Women are devious that way, so it’s best to play it safe and only talk to them when they screw-up.

After another two weeks, Peggy’s behavior was no better, but it was a lot worse. She had deteriorated to the point that she wasn’t just slow about getting things done, she wasn’t even doing them. It was like I had married a really sweet and sensuous dog (an Afghan maybe), but then a mongrel cat from Planet Bad-Ass had crawled into the dog’s brain through its nostrils. It got to where I would tell Peggy to fetch me another beer, and she would look at me like, “Yeah, right, when hell freezes over.”

I finally spoke to her about how I was the husband, and she was the wife, and the wife is supposed to do what the husband tells her to do because it says so in the Bible. When I said this, she got really mad, so I never brought it up again, and I finally gave up trying to make her do anything—her or the cat for that matter because I knew they weren’t going to do it anyway. Now that the dog is deaf, blind, arthritic, and hard to wake-up, I don’t even get the satisfaction of telling her what to do, although, god knows, she would obey me if she could. I feel like a captain whose ship sailed right out from under him in shark-infested waters.

When Peggy and the cat sleep until noon (which is pretty much every day), she makes me bring them breakfast in bed along with a small vase of yellow roses and a large vase of fresh catnip. I hate doing it, but I hate it worse when she yells at me. We’ve been married for forty years, and I don’t know how much longer I should give her to get her act together.
Posted by Snowbrush 29 comments: