Things could be worse—I could be in the end stage of this disease. 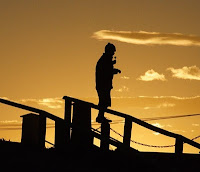 I study the causes of pain because after two shoulder surgeries in one year, my pain is far worse than it was—and spreading—and my surgeon doesn’t know why. During my studies, I have occasionally come across RSD/CRPS (Reflex Sympathetic Dystrophy/ Complex Regional Pain Syndrome). I’ve found strange comfort in its nightmarish nature because when my own hurting was at its worst, I could always tell myself, “I might be bad-off, but at least I don’t have that.”

Well, it looks like I do. At least, my internist thinks so. Usually talkative, he articulated the dreaded acronym and walked out without another word. I have no idea what he was thinking. I'm now awaiting a bone scan.

I don’t see suicide in my future, although I think about it all the time—you might even say I’m obsessed with it. I don’t even see narcotics in my future unless my doctors can give me something that works a whole lot better than Demerol, Dilaudid, Percocet, Vicodin, and Norco, none of which helps enough to justify the side-effects.

But what DO I see in my future? Sometimes, the most cheering thought that I can come up with is that I’ll probably be dead in another couple of decades if I can but hang in there. It’s not a sunshine and lollipops sort of thought certainly, except in a “jump off a skyscraper to avoid being burned to death” kind of way.

So far at least, the pain is not so overwhelming, but what I can often enjoy my time with Peggy, and nothing means more than that. I get support from two places—her and my fellow bloggers. A few local friends try to be helpful, but they truly don’t have a clue, and when we’re together, it’s ever in my mind that I still look healthy. If I were they, I might very well be saying to myself that, surely, the problem just can’t be THAT bad.
Posted by Snowbrush 36 comments: