For those who live with pain 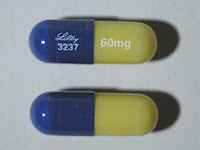 I take the following for pain: Neurontin, Ambien, oxycodone, marijuana, and Cymbalta (an SNRI—selective serotonin and norepinephrine reuptake inhibitor). These drugs are what’s left of the 25 or 30 I’ve used, a list that includes every legal narcotic I know of, a half dozen sleeping pills, various anti-inflammatories, and, for good measure, Elavil. Cymbalta (see photo) has helped most, but, due to insurance changes, my cost for my next prescription will be $607 for a 90-day supply. While looking online for substitutes, I learned that Effexor (another SNRI) is equally good for pain and, because it has been around since 1994, comes in a generic form for $12.32.

The high cost of Cymbalta is why, if you live in America, you are barraged with Cymbalta commercials, whereas you never see Effexor advertised. Along with price, other disadvantages to the latest “miracle drugs” is that their long-term downsides are unknown and they are rarely more efficacious than older drugs. So, why did my doctor prescribe an expensive medication before trying me on a dirt-cheap drug that is likely to be just as effective? Hell if I know, although I’ve noticed that doctors don’t usually know how much drugs cost. They also used to get kickbacks from pharmaceutical companies, although my understanding is that the government put an end to this.

It’s good to remember that you’re probably in a better position than your doctor to know which drugs might help you. For instance, if you suffer from ongoing pain, your medication options are limited, and with a little effort, you can learn what they are and stay abreast of the latest research. Of the drugs I’ve tried for chronic pain, I would say that narcotics are both the most heralded and one of the least effective. I mention this because some of you have trouble getting narcotics, and, as a consequence, appear to hold them in higher regard than they deserve. The reason for their relative ineffectiveness is that you quickly build up a tolerance, so if your starting dose is 5-10 mgs, you might be taking six times that amount (and incurring six times the risks) after a few weeks and still not get as good a result as you had with your initial dose. It is for this reason that I try to limit my narcotic intake to twice a week, but even then the tolerance problem remains.

No doctor ever told me to take more than 20 mgs of oxycodone or Dilaudid at a time. This used to leave me in the troubling situation of thinking that, my god, I’m taking this strong narcotic that people rob pharmacies at gunpoint for, and I’m still in terrible pain—my condition must be hopeless. When I increasingly turned to the Internet for drug information, I learned about narcotic tolerance, and realized that my doctors simply weren’t taking tolerance into account, so I started increasing my own dosage, but no matter how much I took, I soon needed more. (If you should ever consider increasing drug dosage without your doctor’s consent, bear in mind the following statement from the American Centers for Disease Control and Prevention: “In 2008, more than 36,000 people died from drug overdoses, and most of these deaths were caused by prescription drugs.”)

Rather than the prescribed strength being too weak, I’ve also seen it go the other way. For instance, if I had used that 100-microgram Fentanyl patch that one doctor gave me, I’m pretty sure I would be dead. After another doctor started me on a triple dose of Demerol, I could hardly get out my chair for three days. Such overkill (ha) is another reason that you should do you own research.

Because of my positive experience with Cymbalta, I’ve become very interested in anti-depressants for pain relief. Some of you might know that the old tricyclic antidepressants (Norpramin, Tofranil, and Elavil, to name a few) have long been given for pain. Then came the SSRIs (Prozac, Lexapro, and Zoloft are three that I’ve taken), which weren’t good for pain by themselves but were good in combination with a tricyclic. The next advance was the SNRIs (Cymbalta, Effexor, Pristiq), which are effective for the pain of arthritis, fibromyalgia, and neuropathy, along with depression, panic disorder, social phobia, and obsessive-compulsive disorder.

As you can imagine, any drug that can do all that can also kick your ass, as I discovered when I stopped taking Cymbalta cold turkey last November and felt utterly exhausted, experienced excessive scalp sweating, had symptoms approximating the early stages of a horrendous cold, and wanted to rage one minute and cry the next, symptoms that continued for nearly two months. Since I had stopped taking narcotics at the same time, I assumed I was suffering from narcotic withdrawal and so did my doctor. When I finally went online, it didn’t take me any time to become convinced that it wasn’t the narcotics, it was the Cymbalta. Why didn’t my doctor know this? Maybe he didn’t sleep well the night before, or maybe he was thinking about his last patient or the fight he had with his wife that morning. I have no idea, but I do know that one should never go to any doctor with the assumption that everything that can be done will be done, and that it will be done right. I’ve experienced situations in which so many mistakes were made by so many people in so short a time that I imagined myself trapped in a Monty Python skit.

I’ve gone into some detail about anti-depressants for pain control because Cymbalta has worked fairly well for me without severe side-effects or a tolerance problem. It’s important to remember that chronic pain causes anxiety and depression, problems that worsen the pain, and that anti-depressants have the advantage of treating these along with pain. The worse downside to Cymbalta—so far, anyway—is that, having been through drug withdrawal a few times by now, I worry more about drugs that cause withdrawal than I do about drugs that I can easily stop. Whenever I start to focus on such concerns, I remind myself that living with pain and depression pose their own serious health risks. For example, chronic pain makes a person more prone to accidents; depression impedes his immune system; and the two of them together make it impossible to get adequate sleep. I, like so many of you, can no longer imagine a drug-free life despite the fact that I anticipate dying earlier because of it.

I have found living with pain—and the resultant disability—to be a major challenge to my desire to live at all. Many people experience this, and because of it, I have a great deal of sympathy for other sufferers. We share a problem that can be very hard to treat and that many people don’t understand (especially if you “look normal”) and often seem bored by. I do understand what pain sufferers are going through, at least somewhat, and I am far from bored by it. Just as some of you worry about me, so do I worry about you. I am hardly the worst-off of those in my blogging community, and I can thank many of you for helping me keep my head above water.