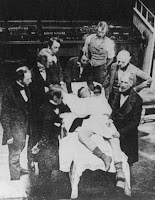 I told the nurse that the patient whose room she had sent me to wasn’t Peggy. She said that it was Peggy, but I still had to look at the old, pale, and puffy woman in the bed for awhile to be sure (I had told Peggy just before her surgery that she looked sexy in her purple hospital gown--which she did). My advice to you is this: if you’re supposed to be in a beauty contest one night, don’t have surgery earlier that day.

While I sat by Peggy’s bed, I pictured us when we were in our twenties, holding hands while we ran for joy across the prairie in Saskatchewan (I remember that day because we were nearly struck by lightning). Now, we hold hands while we hobble into doctors’ offices. Well, we don’t exactly hobble, but we’re getting there.

The universe never promised us an easy life.

The universe never promised us a happy life.

The universe never promised us a peaceful end to life.

The universe doesn’t even know that we exist.

We live for no purpose, and then we die, and the fearsomeness of this thought is why people believe in god.

I’m scheduled for my first of four joint replacements, which means that Peggy and I will be one-armed together. The surgeon and I all but argued—over Peggy’s bed, no less—about which hospital to use for my surgery. I said I wanted to go to Sacred Heart because I could have a private room at no extra charge, and he said he could use his influence to get me a private room at McKenzie Willamette at no extra charge (I have good reason for wanting a private room). “Besides,” he said, “I can give you far better care at McKenzie Willamette.” “Then it sounds like a no-brainer to me,” I said.

Peggy is resting now. I held her hair out of her face while she threw up. How many times have I done that over the last four decades? I’ll tell you. Many.

I just took two stiff drinks. I hurt so much that it’s hard to care anymore what I take or how much I take as long as it stops the pain. I’m not supposed to take narcotics until after my surgery because if I do, they won’t work when, presumably, I need them most. Well, hell, they don’t work that well now. Nothing works that well now, but if I pile pill atop pill and use ice, I can at least sleep a little bit before I have to get up and do it all again.

You don’t think I complain too much, or that I complain without a good reason, do you? Pain is such a private phenomenon that I often wonder where I am on the scale of having a justifiable response. This might surprise you, but I think I handle pain better than most people, but it’s hard to know for sure.

I read from Camus’ The Stranger while I sat by Peggy’s bedside (the morphine made her doze, so I had a little time on my hands).

“He was wearing a soft felt hat with a round crown and a wide brim, a suit with trousers that corkscrewed down around his ankles, and a black tie with a knot that was too small for the big white collar of his shirt. His lips were trembling below a nose dotted with blackheads. Strange, floppy, thick-rimmed ears stuck out through his fine white hair, and I was struck by their blood-red color against the pallor of his face.”

When I was young, such passages were about someone with whom I had nothing in common. Now, they’re about how I will be in fifteen years. Sometimes, I wonder if I will even live another fifteen years. Come to think of it, that’s about the length of a dog’s life—if the dog lives to be fairly old.

Nurses can tell that I adore Peggy, and that touches them. I asked one of Peggy’s nurses today if she will be my nurse when I have surgery, and she gave me her home phone number so I can be sure she’s working that day. She said that if she’s not working that day, she’ll refer me to someone who is. Now, I have my surgeon, my anesthesiologist, and one of my nurses all picked out. My advice to you is this: if someone is good at what they do, stick with that person, and let them know that you respect them. You get better service that way. As you know, I was kidding about the beauty contest, but I’m being serious now. While I’m giving you advice, I’ll also suggest that you praise good workers to their supervisors. One reason for this is that they’ll feel beholden to you, and the other is that you owe it to them.

Do ever feel when you’re writing that, after every paragraph, you could go in a dozen different directions. How do you choose? I choose really fast because otherwise I get too bogged down.

Those two drinks—taken on an empty stomach—were too much. I thought they might be, but I found it hard to care. Now that I feel as if I too could barf, I do care, but it’s too late. Most wisdom comes after the fact, but since the rules about a lot of things are forever changing, after-the-fact wisdom isn’t necessarily better than no wisdom at all.
Posted by Snowbrush 60 comments: