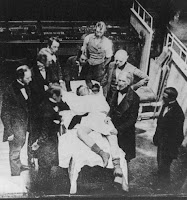 I mowed today for the first time this year. I’ll mow once more before having shoulder surgery in late March; then I won’t be able to mow for months. This surgery takes a year for a full recovery, and I will never regain normal strength and flexibility. What’s more, both shoulders need the surgery, but only one can be done at a time. I’ve cancelled it once, and I’m tempted every waking hour to cancel it again. I can’t say I’m terrified, and I can’t say I’m devastated; but I can say I’m close.

Three years ago, I had knee surgery. Before that surgery, I could hike twelve miles up and down mountains, but my knee would swell a little, so I thought, what the hell, knee debridement is a simple and commonplace operation and, after I have it, I can hike without pain. Since the surgery, I haven’t been able to hike at all, and there are even days when I hurt too much to take the dogs for a walk.

Before having knee surgery, I liked surgical options. My thought was: “If something’s bothering you, don’t beat around the bush, get a surgeon to cut it out—what could be simpler?” I’ve since observed that one kind of surgery can be life threatening yet cause little pain and offer a full and speedy recovery, while another can have a low mortality rate but a significant risk of disability and chronic pain. This realization is similar to one I had as a boy when I would get so sick each winter with colds that I would wonder how, if a minor ailment could make me feel that bad, I would ever be able to hold up against something that might actually kill me. I was relieved to learn that people die everyday of things less annoying than a cold.

Now, I don’t know how I am going to hold up to months of being unable to use one-arm followed by the same thing all over again when I have surgery on the other. A local woman survived having both arms ripped off by a gasoline auger last October, and I tell myself that I should be thanking my lucky stars I’m not her; but reminding myself that I could be worse off never seems to make me feel that much better about how bad off I am. If it were that easy, few of us would ever be put out by much of anything, there being few things so terrible that they couldn’t be worse.

By day and by night, fear rolls over me like a fast train. If it were any greater, I would be hysterical. I say to myself that I am not six but sixty, and sixty is plenty old enough to have become a barbican of strength. I say to myself that I should be limpid, ataractic, eudaemonious, and there is no excuse that I am not. So I say, but berating myself for being afraid only makes me less able to summon my strength.

I feel damned if I do and damned if I don’t have surgery. I’m in pain when I am awake, and pain often awakens me at night. Sometimes, it’s terrible in its intensity, and can stay that way for weeks making it almost impossible to think of anything other than how much I hurt. There have been times when I could scarcely bear to walk because even the gentlest steps were too jarring, and sleep would only come when I was exhausted and would only last for a few minutes before the pain awakened me. Yet, I’m fairly functional most of the time, and the pain is tolerable if I don’t use my arms much.

If the surgery works, I’ll eventually be without pain. If the surgery fails, I’ll be partially disabled, and there’s a 10-25% chance (estimates vary) that the surgery will fail. But if I don’t have surgery, my tendons, which are 80% severed, will eventually break, and the ends will pull apart, making repair impossible.

I had three surgeries last year. Two of them involved biopsies. In the second biopsy, the surgeon went through the front of my throat to get to my vertebra. My fear when I had to get out of bed at 4:30 in the morning to go have my throat cut is beyond my ability to describe. As it turned out, I didn’t have cancer, and I was almost as good as new the next day. Even though my worry then was that I might die, that was preferable to my present fear that I might be permanently disabled and in pain.

Last week, I met an athletic looking man twenty years my junior who had the same surgery in November. He said he was in so much pain for the first two weeks that even Percocet didn’t kill it, and he still can’t raise his arm high enough to shake hands. He looked utterly beaten and demoralized, the living image of my worst fears. Sure, my own surgery could turn out worse than that—I could die—but he represented my worst-case scenario of that which seems easily believable. He even had the same surgeon, not that I’m jumping ship now, this being my fourth orthopedist and the only one I like and trust.
Posted by Snowbrush 12 comments: