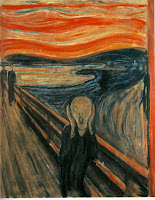 Mark (that would be my surgeon) takes his hardest cases first, and I’m first. I have to check-in at 6:00 a.m. He will remove a bursa, chisel down my acromium (a bone in the shoulder), sever and reattach at least one tendon, and possibly sever and reattach my biceps. He’ll try doing it all arthroscopically, but there is a possibility that he will have to cut me open.

If all goes well, I will be sent home tomorrow afternoon with my arm in a sling, and the sling fastened around my body. The sling comes with a thick pad that will hold my arm three inches away from my chest. I have to wear the sling day and night for six weeks. During the first two weeks, Peggy is supposed to use a weird looking apparatus to pump ice water around my shoulder once an hour for 25 minutes.

After the sling is removed, I will begin flexing exercises. After a month of those, I will (hopefully) be allowed to lift things that weigh a pound or two, and will begin strengthening exercises. After a year, I should have regained 90% of my strength and range of motion. Sometime during that year, I will start the process again on my left shoulder.

I’ve had twelve surgeries (or will have after tomorrow), eight of them since the year 2000, and three of them last year alone. I used to regard surgery as an adventure rather than something to fear. I’ll still grant that it’s an adventure all right, but if my fear were any stronger, I would have to be in constant screaming agony to let anyone near me with a scalpel. The reason for the change was that the more surgeries I had, the more I observed that things just never seemed to turn out the way they were supposed to. Based upon this, I’ve come to expect an unexpectedly bad outcome.

When I had my first fairly serious surgery in 2003, I got into an argument with the anesthesiologist about whether I needed something to calm my nerves pre-operatively. I said I didn’t because I wasn’t scared, and he said I did because anybody in my position would be scared. Now, I want all of everything as I lie there awaiting that gurney ride to the operating room.

Since learning what a drag chronic pain can be, I’ve gone out of my way to stash narcotics. I will actually endure considerable pain rather than take the drugs now at the risk of not having them at some future time when I might be truly desperate. I won’t do that this time because I expect the pain to be of such intensity that it might build to the point that the narcotics won’t be as effective. It’s like when you have a headache. If you treat it early on, you might be able to head it off (pardon the pun), whereas if you wait, you probably won't.

I wish I could think of something good to say, but the only thing that comes to mind is that it will be adventure. God knows; it will be that. And, hell, things might even turn out okay. A year from now, I might be feeling pretty good. Stranger things have happened…I guess. Well, maybe they haven’t. I wouldn’t want to run amuck with optimism here.
Posted by Snowbrush 19 comments: