An update offered in lieu of anything better 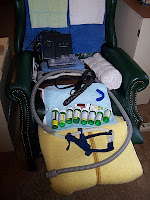 I’m still unable to write anything creative or thoughtful, but I will at least check-in. The pain is no better on the shoulder that was operated on in December, and it’s significantly worse on the other, presumably due to continued arthritic deterioration. I don’t sleep well because of the pain, and the longer I stay in my chair, the worse it hurts. Narcotics have become all but useless for pain relief, but they still get me stoned, and if I’m having an especially bad night, I had rather lie awake stoned than sober.

My lower leg bones are now giving me fits, as if they had been burned. Shin splints feel that way; only my pain is higher up. I finally connected it to the recliner I sleep in. Peggy bought the chair years ago, and it’s a little short for me, so I tend to lie with my legs bowed. When I finally realized that this had to be the cause of my leg pain, I tried forcing myself to keep my legs straight. This didn’t work, so now I’ve taken to fastening a belt snugly around my lower thighs.

Sleeping is complicated. I tie a blanket to the footrest to cushion my heels; place my pharmaceutical stash and toothguard (I grind my teeth when I sleep) within reach; fill my CPAP tank with distilled water (a CPAP is a machine for sleep apnea); hook the mask and the tank to the CPAP; and get one or two ice packs and a heating pad. I drape one towel over the chair back to protect it and another towel around my neck and over my shoulders so I won’t get frostbite from the ice packs. Now, I’m ready to sit down.

I fasten the belt around my thighs to keep my legs straight; unfold my afghan; lay the ice packs over my shoulders, lean back in the chair while trying to keep the ice packs from falling off; lay towels over the ice packs to keep the cold in; put the heating pad on my chest so I won’t shiver from the ice packs; take off my glasses; put in my toothguard; put on the CPAP mask; and, finally, adjust the mask ten or more times until I get a tight seal. One to two hours later, the pain wakes me up, and I have to go to the kitchen for fresh ice packs.

No one knows why the shoulder that I had operated on in December isn’t improving. My physical therapist suggested that I see an MD who specializes in chemical imbalances, but it would cost a lot, and since my yearly physical—which is paid for by insurance—is in a few weeks, I’m going to wait and see how that turns out. If nothing else, it will provide me with test results to take to the new doctor.

If I had only myself to think about, I don’t know how much more of this pain I would tolerate. I had years of it before surgery—although to a lesser degree—and when I had my first surgery a year ago this month, I figured that in twelve months, I would have both surgeries and most of my rehabilitation behind me. Now, here I am twelve months later, still in pain, partially disabled, and anticipating at least one more surgery on my right shoulder. The final outcome of the surgery on my left shoulder won’t be known until the end of the year.

In other news, I’ve been spending hours a day creating a synopsis of my writings. I started in February, and have completed eighteen months out of 30+ years—I don’t know the exact number because some of them are handwritten and unorganized. I had previously completed fifteen years, so the job isn’t quite so voluminous as it sounds. I enjoy the work but wish there were less of it. I also wish I could focus better. Unless you have been in pain hour after hour, day after day, for months or even years; you can’t imagine how tiring and distracting it becomes.

I have zero social life because I have no energy for it. I walk the dogs for a half hour each day, but the rest of my time is spent indoors, often close to despair. I’m not without hope however. I also have a bottle of Lexapro, but I’m not taking it because I’m on so many other pills, all of which are tough on the liver and kidneys—I’m in no mood for organ failure.

As for what efforts I’m making to actually help myself, I’m doing my prescribed stretching exercises—when I can tolerate them— eating sparingly, and taking various vitamin, mineral, and herbal supplements. I stand 5’10” and weigh 168 pounds, so I’m already on the lean side. However, a minimal diet has been found helpful for many problems in animal testing even when the animals weren’t overweight. I’m also intrigued by such a diet because, years ago, I fasted one day a week and lived almost entirely on raw smoothies that I made from nuts, grains, fruits, berries, veggies, and soy milk. I found the combination of fasting and smoothies to be a tremendous boon to my general health, so it seems worth trying now. I haven’t started the smoothie part yet, but I lost three pounds this week.

I have contemplated such a regimen for the better part of a year, but because Peggy opposed it when I did it before, and because food is one of the few things I still enjoy, I only made half-hearted efforts. I kept hoping there would be another way to deal with my problems, or that time would work its magic, but neither has happened.

Some of you have suggested various alternative therapies, and I am grateful for those recommendations. However, I have sometimes been accused of preferring to wallow in self-pity when I didn’t do what you suggested. I never reject a suggestion without first learning something about it. I’m just not willing to spend time and money on things that—in my mind—make no sense whatever and lack even a smidgen of scientific validation.