I Flunk My Manhood Test 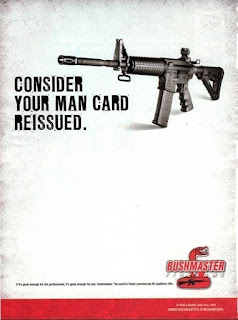 I write this a few days after fifty worshipers in two New Zealand mosques were murdered with an assault rifle. In the same week, America's Connecticut Supreme Court ruled that the parents of twenty murdered six-year-olds could sue Remington Arms, not for manufacturing the Bushmaster assault rife that killed them, but for using advertising that targeted immature and unstable gun buyers, such people representing a sizeable segment of America's gun culture.

Specifically, at the time of the shootings, the Bushmaster website featured a list of promotional manhood questions that prospective customers could answer in order to qualify for a “temporary man card” (a permanent card being issued upon the purchase of an assault rifle), so when I heard of the recent court decision, I went to Bushmaster.com to look for those questions. As expected, I didn't see them, so I clicked on Live Chat, only to be promptly disconnected when I said what I wanted. I clicked on Live Chat a second time, and the conversation proceeded as follows:


Bushmaster: Hello, how can I help you?

Me: How do I get my temporary man card?

Me: I read that visitors to Bushmaster were asked a series of questions following which they received a temporary man card? Is this no longer true?

Me: So what is true?

I again tried to find the questions offsite, but the best I could come up with was a series of screen shots: https://www.buzzfeed.com/scott/bushmasters-shockingly-awful-man-card-campaign.

Here are a few of the qualifying (or maybe I should say disqualifying) questions, some abbreviated in my words and some right off the site:

Do you eat tofu? Can you change a tire? Do you own a small dog? Is your inner light best represented by a kitten, a candle, or an assault rifle? Do you wear hemp clothing? Have you ever watched figure skating “on purpose?” “What would you do if you were on your way to a championship sports competition and a car full of the rival team’s fans cuts you off in traffic?” (The correct answer? “Skip the game, find the other car in the parking lot, and render it unrecognizable...”)

Bushmaster warned applicants that their manhood cards could be revoked by other men for being a “crybaby,” a “coward,” a “cupcake,” ”on a short leash,” owning a small dog, installing a sissy bar on an ATV, skipping poker night to watch a musical, uttering the words, “I will _____ if she lets me,”or being in some other way “unmanly” (the word was represented by a woman in a skirt).

I later browsed newsgroups related to the Bushmaster ad campaign. On one of them, a Brit had written, “You Yanks are sick fucks. No wonder the whole world hates you,” but what use does a country that owns one gun per person (second place goes to Serbia with 0.75 guns per person) have for the respect of the people in the other 195 nations of the world?

Remember the question about how a manly man would react to being cut-off in traffic? The answer assumed that a real man would miss the game in order to wreak vengeance, but how would he find the courage to risk confrontation with a “car full” of other men? He would be carrying a gun that, out of the box, has a fire rate of 45 rounds per minute, but that with a cheap modification can fire 10 rounds per second. According to the American definition, a real man doesn't really need intelligence, courage, nobility, goodwill, a respect for law and order, or even marksmanship, because he is driving down the highway with a weapon that, within seconds, can cut scores of people to pieces at no risk to himself, that is unless his intended victim is another real man who whips out his own assault rifle.

Adam Lanza, the Connecticut school shooter, lived with his mother. He had no job, no friends, no ideals, and showed no kindness to anyone. He murdered his mother, six school employees, and 20 first graders, yet, according to Remington Arms, he became a real man the moment he put his money on the counter for an assault rifle. Yes, we Americans are sick fucks in that we equate masculinity with anger, violence, misogyny, and vengefulness (our president embodying all of these things), and we frame our laws so that mass murder is commonplace. The New Zealand prime minister said that hers is a peaceful country that fell victim to vicious outsiders, by which she apparently meant Australians. Yet the corpses had barely stiffened before New Zealand gun sales soared. It's as if all those Kiwis looked across the globe at far off America and said to themselves, “We too want to be real men.”
Posted by Snowbrush 9 comments: