Dogs. I’ve always had dogs. First, there was Mike who was old when I was born and wouldn’t allow anyone but family near me. I use to pee on Mike as he lay on the ground, his great tail thumping the earth. Mike went into the woods one day when he was seventeen and never came back. I was told that it was the way of dogs to die alone, and I believed it at the time. Now, I don’t know. I’ve had few dogs who got to choose.

The mailman missed Mike terribly, having run over him several times through the years. Dogs regard mailmen as persistent intruders who would steal everything and kill everyone if not chased away daily, and it’s hard to convince them otherwise since, by all appearances, they are 100% successful in protecting their homes and families. Everyday, the mailman comes, the dog barks, and the mailman leaves. It illustrates David Hume’s conviction that, just because one event follows another, we can’t assume that the one caused the other; but how many dogs have read David Hume? 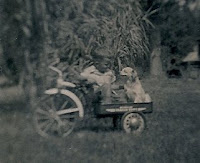 I don’t know what dog came after Mike, there being so many, and them dying so young. Cars killed them for the most part, either outright or later. Some might have been saved, but country people didn’t take their dogs to the vet; they just got new dogs. Peggy and I treat Bonnie and Baxter like children, but when I was a child, dogs were more like to contract laborers. In return for barking at intruders, we fed them, wormed them, pulled their ticks, and dipped them in creosote when they got the mange. That was the deal, and dogs were too loyal to form unions.

Our dogs invariably came from places on the side of the road where people dumped their garbage. In a typical scenario, Dad would be scavenging in one of these dumps when he would find a litter of puppies. When he got home, he would tell Mama about them, and being softhearted, she would tell him to go back and get them, which was surely what he wanted to do anyway, or else why would he have said anything? They were usually too young to eat solid food, so she would feed them with a doll’s bottle. When they got bigger, she would give away all but one or two. 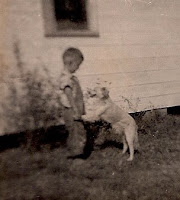 I got to name our dogs, and not being a terribly original kid, I always used the same three names—Wolf, Tippy, and Sassy. That doesn’t sound like a lot, but it was way more than the cats got; they were all called Tiger. I wrote the following true stories in 1960 when I was ten. I copy them as written.

“Sassy was about the best dog I ever had. She was very playful. She wasn’t famous are anything like that. But she just gave you a warm feeling.

“We found her and 4 other puppies in a ditch on the roadside. She had a pretty color of white. Dad did that is when he was coming home from work during a rain one morning when it was to wet to work. He came home and told us about them, and mama told him to bring them home. Gay and I went with him. I don’t know the date. We fed them out of a doll bottle.

“Sassy only lived to be a little over a year old. I remember we used to get out and play with her and the other dogs. We gave all of the puppies away expect two.

“When Sassy died I was raking the grass, and dad was cutting it. And a car turned around in our driveway and Sassy started to chase it, and as soon as it got in the road Sassy got under one of the wheels. She turned and ran for the house and fell in the front yard. I ran and got mama and dad they said she was breeding inside. In about ten minutes later she died. She is berried in the back yard of our house. And we berried her on the same day. Gay and I prayed and singed for her.

“I don’t remember much about Wolf, but I do remember he killed chickens. Well anyway, he was one of Sassys puppies. When Sassy died he was a orpan. That was the second time we had five orpan puppies.

“After Sassy died we to care of him and the other puppies. They became pretty big to. Even bigger than Aunt Annies puppies “Pal,”

“When got grown he started killing chickens. We whipped him but he wouldn’t stop.

“We used to play with him a and our other dogs in the yard. He fought the other dogs off so he could have all the food. He was very rough.

““Oh Yes,” I almost forgot we was talking about him killing chickens. So one Sunday we came home a found about 5 chickens dead.

“Ma Ma wanted Dad to shoot him with my new gun. But we decided to take him off. That is all I remember about Wolf.”


My great-great uncle, King James Newby lived in Arkansas with his wife, Molly, and a pack of coonhounds. Molly complained bitterly about the dogs barking, digging, chasing chickens, and pulling laundry off the line. After years of being ignored, she gave King an ultimatum: “King, either the dogs go, or I do.” His answer was: “Me and the dogs are sure gonna miss you, Molly,” whereupon Molly kept her word and moved to Mississippi. When my father visited Uncle King years later, he found the old man living alone on a diet that consisted mostly of eggs, the shells of which he threw into a barrel beside his woodstove. After a few days, my father got up the nerve to ask, “Uncle King, do you ever think about taking another wife?” “Humph,” King snorted, “I’d rather sleep with a wet dog than with any woman that ever lived.” Thus is illustrated the loyalty of the men in my family. 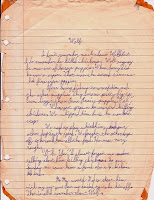 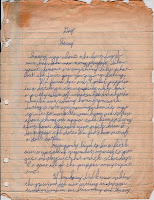