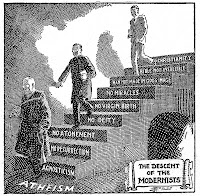 The Southern Baptist Church is the second largest Protestant denomination in America, and by far the largest in Mississippi. Like a few other churches, it got its start during the American Civil War (1861-65) when Northern Christians used their Bibles to prove that God thoroughly loathes slavery while Southern Christians used their Bibles (effectively, I thought) to prove that God simply adores slavery, and that, as an added bonus, slavery gives white people a convenient opportunity to preach Jesus to all them poor benighted niggers who would otherwise go to hell, and who don’t have brains enough to be anything but slaves anyway.

My church, the Church of Christ (henceforth Christer), was a distant second in size to the Southern Baptist in Mississippi. The two churches were so much alike that you would be pressed to tell one from the other except that the Baptists had pianos and Sunday School literature. The Christers shunned musical instruments because “Jesus and the apostles didn’t use them,” and they shunned books other than the Bible because “Jesus and the apostles didn’t use them.” You might not consider such differences important, but the way the Christers saw it, “any deviation from the clear and concise Word of God” was intentional and would land you in hell.

Did you have Baptist friends, and did you worry about them going to hell?

Yes, I had Baptist friends, and, no, I didn’t worry about them going to hell because I was taught that they defied God by choice. Such a condemnatory attitude toward other beliefs shouldn’t be taken to imply that Christers spoke with one voice. The far left Christers allowed women to teach Sunday School; the middle-of-the-road churches (which I was in) wouldn’t let them talk at all; and the far right churches were the same way, but they also limited themselves to one “cup” for the weekly communion (that’s how many Jesus used), while the other Christers used stackable trays that contained enough tiny glasses for everyone. I thought these were way cool, and I loved the smell of Mogen David, so I always made myself available to “serve The Lord’s Supper.” I also said prayers, led the singing (badly), and delivered sermons. I think it was assumed that I would go into the ministry, but when I stopped attending church after my teenage efforts to liberalize it failed, nobody came looking for me.

I considered the Baptist Church hypocritical and insufferably plebeian, but my main objections were that, as I was told, Jesus didn’t get himself crucified so his church could be named after John the Baptist; and I added to this my own observation that my Baptist friends didn’t know much about the Bible. Christer preachers said this was because they didn’t read it; they just read Sunday School books that contained “man’s interpretations.” What more proof could anyone want that Baptists deserved eternal hell for “living in open defiance of God’s Holy Word”? Of course, Methodists and Presbyterians were even worse because they sprinkled babies; Catholics were worse yet because they worshipped the pope; and Jews were worse than all of them because they hated Jesus. There were people worse than Jews though—atheists, godless professors, secular humanists, and Communists. You will note that the common thread (the “underlying evil” as the Christers called it) in all these groups was atheism. As they saw it, the only thing worse than an atheist was a Christer who became an atheist because God wouldn’t forgive him even if he changed his mind.

I have found it indescribably strange and hurtful to become the very person whom I was told, week in and week out for eighteen years, is the most foul piece of Satanic excrement in the whole universe, and then to look at the institution that told me this and to think the very same thing about its approach to truth: namely that of basing it upon sketchy stories in an ancient, contradictory, and historically inaccurate book by unknown authors, a book which presents a “fully human yet fully divine” being named Jesus who was likewise fully God yet one-third God. The mischief that has come from accepting such an authority as the starting place for ethics—and even science—is too great for me to wrap my mind around. And yet some Christians say that this authority is really very good—perfect even—and, properly understood, couldn’t possibly inspire the violence, oppression, and other evil acts that other Christians perform everyday. When I hear such statements, I wonder where the line is between religious faith and delusion, the two appearing indistinguishable to me.
Posted by Snowbrush 41 comments: