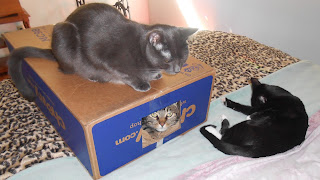 Because they have a mystique, won’t let humans define them, and each is world unto itself that is fascinating to observe.

Six weeks after getting our third cat, I am ready for a fourth if Peggy were agreeable, but she isn’t even happy about my fifty-seven volume library of cat books. I said to her, “Look here. You used to complain that I never spent money on myself. ‘Why don’t you ever treat yourself,’ you would say, so after 43-years of hearing this, I started collecting cats. Well, you put an end to that, so I started collecting books about cats, and now you say you don’t like that either!?”

In all fairness to Peggy, no matter what kind of a pet it is, one more than you already have seems like more trouble than “one more than you already have,” although I should think the opposite would be true. For example, getting a second dog years ago seemed like more than twice the work of having one dog, and getting a third cat seemed like more work than one half again the bother of two cats. As for my books about cats, Peggy wouldn’t complain if I hadn’t just filled twelve feet of shelf space with books by Margaret Deland and other Victorian era authors, leaving me with no space for my fifty-seven cat books. On the other hand, Peggy has been looking at puppies, and I figure one dog equals at least four cats. I also worry that the cats will be tre upset if Peggy brings home a dog. “Why don’t you get a parakeet?” I say, “The cats and I would love to have a parakeet.”

When Brewsky, our tabby man, was a kitten, the more I didn’t want him to do something, the more he wanted to do it. Having been a dog person and therefore been accustomed to my pet giving a rip about what I wanted, I concluded he was criminally insane. I also found his nightly yowling rampages unnerving, but his willfulness was my main problem, and it often inspired me to chase him through the house while waving my arms and cursing. Each such occasion would end with him looking out at me from under Peggy’s green leather recliner that she inherited from her Granny (and never uses) while I threatened him with dire consequences should he ever dare to do X again. A few minutes later, he would do X again, and I would reflect that it could be a long twenty years because I mistakenly imagined that his whole life would be the same way because I didn’t realize how dramatically kittens change when they become adults. Now, Brewsky tries hard to make himself agreeable, yet he’s so comfortable around me that he rolls over on his back and stretches his legs out when he wants to be petted. He’s also good with strangers, okay with having his toenails clipped, and loves his nightly brushings.

Scully is our shimmeringly gray muscle boy with GQ good looks. He’s also our most sensitive cat, which makes him prone to vomiting when he’s upset. Unlike Brewsky, he was a delightful kitten, but, at fifteen months, became shy. I thought to build his confidence by never petting him unless he clearly wanted it, but the more I did this, the more fragile he became, so two weeks ago, I took the opposite tact and started petting him even when he tried to get away. He has since become so self-confident that he’s pushy at times. My growing comfort with cats has made me willing to experiment even if it means going against the advice of every book I own, which was the case with Ollie. I’ve also learned that cats are forgiving, so if they trust your love, you can be bolder than most people imagine, including people who love cats.

The worst thing about Ollie is that he is still nursing on Brewsky, so I finally bought some bitter spray and started putting it on Brewsky’s nipples yesterday. I had hoped it would discourage Ollie from nursing, but it has instead caused Brewsky to rabbit-kick Ollie whenever he tries to nurse. I would not mind him nursing nearly so much if he didn’t slurp, and if Scully was not also starting to nurse. Such behavior usually occurs in cats who were taken away from their mothers too soon (Ollie and his siblings were found dumped on the side of a highway when they were still tiny). As for Scully, she had a secure childhood, so I think she’s just following Ollie’s lead.

Scully is just shy of six months of age, and I think of her as a saucy little wench who loves her two “uncles,” but wouldn’t take any gruff from them even when she was a baby. What with her tuxedo markings, her autumn-leaf brown eyes, her white whiskers and feet, and her bold and intelligent expression, I’ll never have a more beautiful cat. Yesterday, I told Peggy that I have the good fortune to live with the two most beautiful females on earth. I look at Scully and marvel that she’s mine because it was only after we had had her for three months that Peggy confessed to not really meaning it when she agreed to let me get Scully. She was instead, she said, “calling my bluff” based upon her belief that I was just kidding about getting a third cat. Imagine her surprise when I took off like a shot when she agreed.

It’s true that when I turned around to blow her a kiss, I thought it odd that she was holding her head in her hands, but when I went back, she said she was fine, so once again I took off like a shot, only this time I didn’t look back. It turned out that I was but three minutes ahead of another person who wanted Scully (someone actually applied for Ollie before we did, but their application was rejected.) Thankfully, Peggy is now delighted to have Scully because Scully is a perpetual ray of sunshine. My only regret is that I can’t stop her from turning into a grown cat. I would even like to get a new kitten every year because kittens are a like a shot of joy both to grown people and to grown cats.

I don’t know how many people know this, but girl cats aren’t supposed to be as loving as boys. One of our first experiences with Brewsky was taking him to the vet for a check-up, and hearing the vet’s assistant say that she was glad we got a boy because boys are more mellow and affectionate. I’ve heard this same sentiment expressed by other people, but I can’t tell thus far. I just know that I wouldn’t trade Scully for all the boy cats on earth. Besides, Peggy wouldn’t want three-thousand-million boy cats—give or take a few.
Posted by Snowbrush 18 comments:

Who Would You Vote For?


Here are the first 23 words for each that I just now associated as fast as I could with our two leading candidates. Only Clinton inspired any positives, but I won’t be voting for her. So who will I vote for? Jill Stein, the Green candidate, who, if she’s lucky, will get 3% of the vote.

Oregon’s numerous Democrats assure me that a vote for anyone but Clinton is a vote for Trump, but a person can only hold his nose so long, and I’m going to let go. Why is it that we have no candidate who both has a chance of winning and is wise, strong, rational, and seems like a real flesh-and-blood person instead of these masked nightmares who think that violence is the answer? When I look into the hearts of Trump and Clinton, all I see looking back at me are demons with blood on their hands. We, the American people, limit our presidential choices to candidates who are going to drive us over a cliff because a cliff is where our values are taking us.

Words that I associate with Trump: