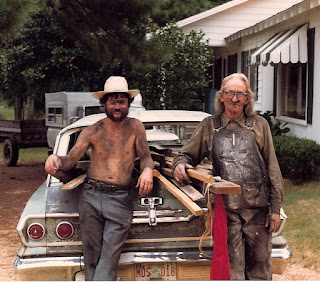 The more remote the past, the less real it seems, and this includes my own past. I was looking for another picture just now when I came across this one of Dad and me. The year was 1980, and we had been tearing a plaster ceiling out of a hundred year old house in Brookhaven, Mississippi, in 102-degree weather. Dad wouldn’t have worn a dust mask for the work, but I might or I might not, my awareness of such things increasing with time. Twice a day, Mrs. Nations would invite us into the kitchen for a cup or two of strong coffee. I rarely drank coffee, so I stayed ripped on caffeine for days. I found that I liked the feeling, a lot. I also liked Mrs. Nations a lot because she was both cultured and oblivious to the class prejudice that would have kept most upper class women from befriending their carpenters. I thought she represented Southern womanhood at its noblest, and I wish I had told her. It was on this same job that two theatrically slutty women started making eyes at me as I was buying chicken dinners for Dad and me at Winn-Dixie. When the three of us got to the parking lot, they said they had to pick their kids up from school in a couple of hours, but would have time to hang-out for a while at McCall Creek. I said, “Are you ladies telling me you want to fuck?” and they giggled. I figured they wanted money, but I didn’t ask. I did ask if Dad could come. They asked how old he was. I said 70, and they declined. I told Dad about them, and he said I should go if I wanted to, but I considered it all too weird, and, besides, I was never one to pay for sex.

I hastened to look away from that picture just now, not due to any negativity regarding my memories but because it was so long ago that it seems like an event out of someone else’s life. For the past to feel this way un-centers me. I imagine myself floating in space. I feel as if I’m floating in space, and it makes me nauseous, but it also makes me feel high and free.

“There are mystics who are said to have experienced God directly. He was a mystic, too, and what he had experienced was vacancy—a complete certainty in the existence of a dying, cooling world, of human beings who had evolved from animals for no purpose at all. He knew.” Graham Greene (from The Power and the Glory)

Floating without purpose. No center. No foundation. The past and the future a fiction to the present, and the present replaced by the future even as I try to grasp it.
Posted by Snowbrush 15 comments: