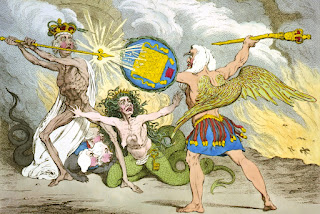 I didn’t know she read my blog until she happened to mention it today. That’s the problem with giving your blog address to people and then assuming that they don’t read it based upon the fact that they never tell you they read it. You keep on getting more and more direct in the expression of your opinions, and two years later you learn that someone has been reading stuff—by you—that might have sent them up through the roof of their house, down through the roof of your house, and directly onto your skull. In this case, the speaker was a Glen Beck conservative and, since I know she’s also a Christian, I assume that she’s an old school literalist as well. Yet, she said she enjoys my writing. My first thought was that she was just having herself a little fun before pulling out her .45 and blowing me away. Then came gratitude and, after I had thought more about what she had said, a lump in my throat. All else being equal, I value a reader like her over a reader who agrees with me. This is why I sometimes share my blog with people who have given me no inkling that they will enjoy it. I’ve gotten a lot of practice in handling rejection that way.

In the reverse direction, two of you have asked how I put with Rhymes (aka Bob), a devoted reader from Georgia, USA, who is also a devoted Methodist. I could have answered the question by saying, “Put up with him?! I’m crazy about him. There are damn few people whose religion you can criticize unsparingly and them still want to hang out with you, and I’m certainly not going to make it more difficult for him than necessary by taking anything he says personally. So what if he gets exasperated? I get exasperated too sometimes. Given his point of view, I marvel that he doesn’t get more exasperated. If anything, I think he’s ahead of me in this, and it makes me want to show him that I can build just as good a bridge across a chasm as he can. No fundamentalist Christian Republican is going to outdo me for tolerance, no sirree. Tolerance comes from wisdom, and wisdom can jump any religious or political boundary. This is why I’m forever trying to increase my allotment of it. It’s also why I sometimes find it where I least expect it, and sometimes don’t find it where I most expect it.

Rhymes is actually so tenacious in reading my blog that I sometimes wonder if he thinks that God gave me to him as a special project. In this fantasy, he has saved more souls than anyone else in the whole state of Georgia, including John and Charles Wesley. He has, as it were, gone through decades of preparation for me at Trinity University for Laudatory Improvement and Personal Salvation (TULIPS for short) where he has a 4.0 grade average, and I’m his post-post-post doctoral project. So, here he is, grimacing and sweating while pulling my soul from one direction, and here Satan is, grimacing and sweating while pulling from the opposite direction, and here I am doing my best to help Satan kick Rhymes in the teeth so he will let go of my arm. Meanwhile, all the angels are looking down, and they’re cheering Rhymes on; and all the demons are looking up, and they’re cheering me on; and all of you are thinking, “I don’t know how much more of these two I can stand.”

The artist took such outrageous liberties that the illustration isn’t a good likeness of me, but I couldn’t get him to redo it.
Posted by Snowbrush 24 comments: