How do you recognize a non-comformist? 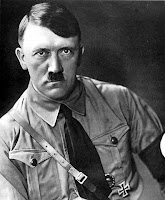 They all look alike. In 1923 Germany, they looked like Hitler. In 2010 Oregon, they wear tattoos, nose rings, lip rings, eyebrow rings, green hair, and faded jeans with gaping holes in the knees. The Hitler look was more than a fad, of course, while the current buffoonery will soon go the way of crewcuts and bellbottoms, and dermatologists will get even richer removing indecipherable tattoos from wrinkling skin.

I’ve become absorbed in Hitler lately. No, I’m not going to become a neo-Nazi. Passing passions are just how I learn. They’re why I know a little about a lot of things, but not a lot about anything. So it is that my time of late has been devoted to Hitler documentaries, Hitler movies, and Hitler books. I even took a stab at the music of Wagner, but sixty minutes of boredom was enough. 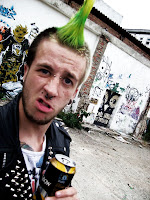 I have a Nazi flag plus the certificate an American soldier had to get signed to bring it home as a war souvenir. I bought the flag at an estate sale in Minneapolis in 1989. $75 seemed like a good price, so I figured I would sell it and pocket the difference. Then it occurred to me that some neo-Nazi group might buy it, so I kept it. Now, I don’t even know where it is, but it’s here, probably tucked away in a box of clothes that I bought on sale but never wore (I’m forever thinking I should dress better, but I never quite work up to doing it). I once got the idea that I should burn the flag as a symbolic refutation of evil, but then I remembered that destroying history was what the Nazis did—and what the Taliban did when they blew up that statue of the Buddha.

Besides, I rather like having that flag because it’s surely the single most powerful symbol the world has ever known (there being many different Christian crosses). Even though I don’t even know where it is, the mere fact that it’s in this house somewhere gives me a connection with the billions of people whose lives it touched. Kind of, anyway. My problem is that the past seldom seems real to me. The future doesn’t either, actually, but it seems more real than the past because the past is gone, and the future hasn’t gotten here yet. The present seems real enough, but everytime I try to grasp it, it has already become the past. This makes me feel as if I’m floating, which is why I plan to re-read Sartre’s Nausea when I’m done with Hitler.

Of all I’ve read and all I’ve watched, the thing that stands out most is the execution of a Nazi war criminal by a firing squad. His was but one of scores of deaths I saw, but the rest run together. The morning on which he was marched into a large pit was cold. He wore his uniform and walked upright. When he reached the place where he was to die, his legs were tied together loosely for no good reason that I could see. Then a hood was placed over his head and his hands were tied behind a wooden post. He was standing tall with his chest out when the twelve soldiers fired. A spray appeared behind him, and, after a moment, he slumped forward. Then a dog howled piteously. I watched this execution…

I stopped writing to answer the phone, and, as I talked, I could see the words I was saying. I could even see the punctuation. It’s scarier to hallucinate when I haven’t taken anything, but it’s also more interesting.

I watched him die repeatedly in slow motion. The spray seemed to be composed of flesh and splinters, which was what I expected. But I also saw what looked like smoke rising, and it took me awhile to realize that it was condensation caused by heat from his body meeting the cold air. A few moments earlier, the heat had come from his nose; now it came from his back. Over and over, I listened to that dog, and his howl seemed to encapsulate all the misery of the war. Fifty-five million people died. Imagining their deaths is like imagining time without end or space without boundaries. Still, I can’t stop reading about the man who started it all, the man who would surely have been stillborn if the universe were benevolent.

Peggy has little tolerance for tragedy (she sees enough of it as a nurse), so last night—after having watched a little of what I had watched and hearing me talk about it for days—she insisted on watching “Charlotte’s Web” to lift her spirits. Until this moment—now—I never shed a tear about all the misery I absorbed through my study of Hitler, yet I cried over the death of a make-believe spider in “Charlotte’s Web.” I guess it was safer that way.

I can’t leave World War II alone (I’ve returned to one aspect of it or another for years) because to do so would be to imply that all that misery didn’t matter. Besides, I am desperate to understand it. I simply have to know why we are as bad as we are when it would seem so easy to be better. I write this as a citizen of a nation that is ever at war. I think it’s what our leaders do to feel important, and that was probably Hitler’s reason too, that and wanting to rule the world.

I always edit for days before I post, but this feels right without editing. I’ll probably be mortified tomorrow and spend next week editing the hell out of it, but I’ll take that chance. I’ve heard that shit happens, so I suppose spontaneity does too.
Posted by Snowbrush 32 comments: