Peggy: sixty years worth, ten years at a time


1952. That's Peggy's sister on the right. Dianne was (and is) timid, whereas Peggy was (and is) tomboyish. You might have guessed this from their body language. 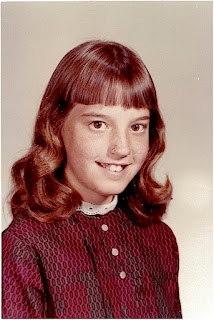 1962. As I was looking at this photo trying to think of what to say about it, I had the thought: "I could just eat this little girl," but I realized it might be interpreted sexually when what I meant was that that I want to use my body to build a fort that would protect her from all the sad things that have since happened in her life, many of them caused by me. Even that doesn't capture what I feel when I look at this picture, but it's the best I can do. The sweetness, alertness, kindness, shyness, playfulness, innocence, tomboyishness, and femininity in her face is, well, when we talk about the sacred, I feel like saying, "But I feel the sacred all the time. Looking at this picture is one of those times." 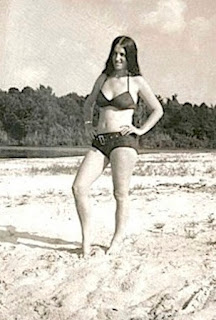 1972. By now, we had been married six months, but hadn't known one another a year. This photo was taken on a canoe trip on the Pearl River near Jackson, Mississippi. I'm sure I put Peggy up to the pose because she was too shy to do such things naturally, and our relationship was still new, after all, despite the fact that we were married. 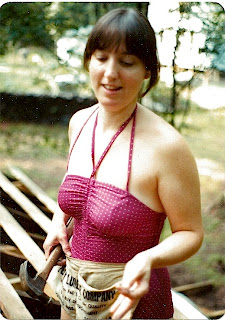 1982. We were building a shed at our home in Mississippi, and Peggy appears to be having an amiable interlude with a nail--either that or she's asking it not to bend when she drives it into the oak lathing. She insisted on the un-carpenter-like apparel and wouldn't wear anything on her feet but sandals. One day, we were splitting wood, and she dropped a large piece of post oak on her foot and broke it--the foot, of course. Silly me, I thought this meant a speedy trip to the hospital, but Peggy said, "I'm not going with my hair dirty," so I held her erect while she showered. 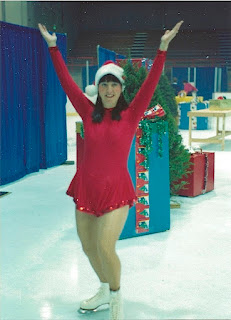 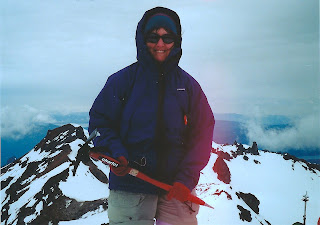 2002. Even I have summited the mountain in the photo, but it's a little one that you can scramble up. You've got to be willing to work hard and risk death to get up the ones that are technically challenging and prone to bad weather. Peggy couldn't get enough of them, so I became her support person, going on training hikes with her and keeping camp at trailheads. Mostly, though, she and a half dozen men (few women climb) would go off and leave me home, and that was fine with me. The red thing in her hands is an ice axe. It's good for probing for crevasses, climbing steep snow or ice, and self-arresting when you fall (you will fall). 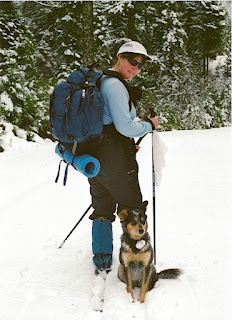 2002. Those are cross country skis. Peggy and I did this together a fair amount, and we also snowshoed a little, but she found them boring compared to the excitement of downhill skiing, so she was forever going off with another carload of men to Hoodoo Ski Area or Willamette Pass. I don't like snow, so I don't miss cross country skiing much, but I would still like to go occasionally. Mostly, when we were going, we would simply drive to where the road was closed by snow and take a day trip from there. We have snow camped, and we have also skied to fire towers and spent the night in them. This photo was taken on a day trip, You can tell because the pad is too short for lying down (it's for sitting on), and the pack is too small for carrying everything we would need to camp. Bonnie was five in the photo. She's now 14 1/2 and blind. She still likes to play fetch. 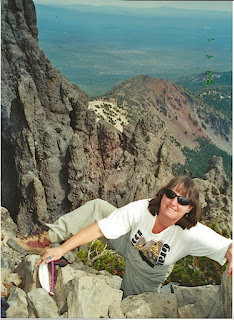 2002. If the slope below her was as steep as she's making out, I doubt that Peggy would be holding her cap in her hand, yet she did go on rope climbs that people have been dying on for decades. Like many of Oregon's Cascades, this particular mountain has a bad reputation for "rotten rock," meaning rock that either comes off when you pull or push on it, or else falls on your head for no reason other than that your luck was bad. People have climbed Everest only to die in Oregon because mountain climbers aren't interested in safe mountains. I didn't like for Peggy to climb dangerous mountains, but it was in her blood, and I've never imagined that I had the right to tell her what she could or couldn't do (I subscribed to Ms Magazine for her when it appeared in the early '70s, but I was the only one who read it). I would be at a loss how to handle a subservient woman. On the one hand, it sounds sexy, but I don't know if I could respect her. I want influence, not control. 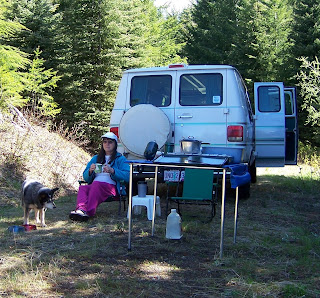 2012. Sad to say, but Peggy no longer engages in any strenuous activity, probably because of arthritis more than anything. She just took up drinking coffee, so in the photo she is having her daily brew of 3 parts vanilla soy milk to one part strong coffee. We try to find campsites with a good view and that (except for the road we drove in on) are so closed in by terrain or vegetation that we can let Bonnie roam freely. The thought of losing a 14 year old blind dog in the wilderness is simply too horrible to contemplate. You can see that we camped directly on the road, confident in the improbability of anyone coming.

Despite the fact that Peggy is the breadwinner in our family and has enjoyed a lot of traditionally male activities; she is all woman. And despite the fact that my bedroom is pink, I cry more easily than she, and my father was a transexual; I am all man. We have always given one another the freedom, and even the encouragement, to transcend traditional gender roles. Perhaps, this was made easier by the fact that we have always known who we are.
Posted by Snowbrush 20 comments: