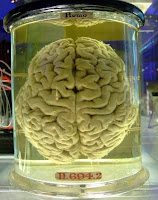 I lost another follower today. Sometimes, I offend people because I don’t make myself clear; other times because I do. Causing offense is one of the downsides of being: (a) utterly opinionated; (b) seeing myself as the smartest person in the universe; (c) not really liking or respecting humanity in general; and (d) being totally off-the-wall terrified about my upcoming surgery and therefore less than sensitive to people’s feelings.

For months, my list of followers grew, and I became increasingly distressed because I couldn’t keep up with their blogs as diligently as some of them kept up with mine. Now, I’m slowly losing followers. In one way, I’m glad because I can start getting a handle on paying attention to those who have remained loyal. In another way, I’m sad because it reinforces my belief that I’m not terribly likeable. How ironic, this desire to be loved by everyone despite the fact that I give most people little reason to love me. I would like them to see beyond the gruff exterior behind which I often appear and to realize that it’s partially composed of scar tissue, but why should I expect so much from people whose intelligence I credit so little? Because I want to be proven wrong.

Here’s the thing. I agonize over this blog. You would not believe the hours I put into trying to get to the core truths behind every post, trying to weed out every superfluous word. I like to think I’m good at this. I like to think my blog is more deserving of your attention than those many blogs that are, in effect, stream of consciousness diaries. Do I succeed? Hell if I know. I often edit until I can scarcely make sense of what I’ve written. To understand what I mean, think of how your impression of a song changes after it has been stuck in your head for days, or how you feel when you stand so close to a painting that you can no longer see what it represents.

When I lost that follower today, it strengthened my conviction that who I am within my deepest self is never going to have mass appeal. My writing will mean a lot to a few but less than nothing to the many. They will find me heavy, intense, cynical, and irreverent, and I will find them silly, credulous, and superficial. Yet, writing, for me, is a matter of such deep integrity that I can unhesitatingly promise you that I will do my best to represent myself fully in the areas into which I delve; not simply as an exercise in omphaloskepsis, but as a way to get to some truth that I can but hope will resonate with your own truth. At best, my truth will stimulate you to look more deeply for your own truth, even though it differs from mine.

Today, I have little time to edit because I am down to measuring the time until surgery in hours rather than days, but what this post lacks in care, perhaps it makes up for in passion.
Posted by Snowbrush 39 comments: