A return to controversy 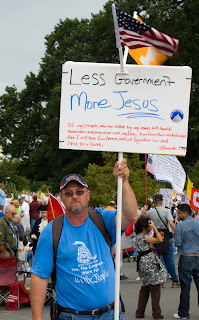 “…it really bugs me that atheists expect others to not pray publicly because they are uncomfortable... What about majority rules?”

I addressed the above question in the response column to my post before last, and I wrote two draft posts about it. This is the first of those posts.

My feeling when I hear people pray publicly is the same outraged disgust that I would feel if I saw people having sex on the sidewalk. Christians can pray every waking moment for all I care, but nowhere did Jesus or the apostles order anyone to pray aloud in public—in fact, Jesus said just the opposite: “But whenever you pray, go into your room, close the door, and pray to your Father who is hidden. And your Father who sees from the hidden place will reward you.”

When I hear people praying publicly, I don’t interpret their goal as the obtainment of whatever they’re praying for (they wouldn’t need to pray out loud for that), but rather as an attempt to force their religion upon non-Christians in a way that the founder of that religion opposed. It’s to work toward making America into their version of a “Christian nation” by proving that Christians have the clout to do as they please, and that if the rest of us don’t like it, then we can jolly well move to Iraq where the locals know how to deal with people like us (this being a sentiment that atheists often hear).


Such Christians claim that they’re discriminated against if denied the “right” to turn every event into a worship service to their God, whether it’s a city council meeting, a school board meeting, a school assembly, a high school pep rally, a basketball game, a community improvement club, a Congressional committee, or a gardening club. There is no public park or building that they would leave free of the symbols of their religion, and there is no public meeting that they would leave free of prayer, and they have no qualms about breaking the law to accomplish their goals.


When they’re confronted with the illegality of much of what they do, they say they serve God first, and that when the law of the land goes against what God wants (they, of course, know what God wants), God expects them to violate the law. Whereas such Christians used to make much of their patriotism, they now claim that our government has been overrun by the forces of Satan (as exemplified by abortion, secularism, gay rights, and universal healthcare), and say that it is their goal is to win it back to God (unregulated capitalism intertwined with Christian worship and morality) because to do otherwise is to see it fall into complete ruin and be enslaved by its enemies in the same way that ancient Israel was enslaved when it “turned from God.”


All this, and certainly not the prayer itself, is what's primary, so it’s what atheists hear when they attend a public meeting only to find themselves an audience to a Christian religious observance. They are often advised to simply not listen, or to get up and leave until the prayer is over, but the point is not that they’re in the minority and should have the good manners to go along with the majority’s wishes, but that they’re in a meeting that is supposed to be for all the people and should therefore be immune from practices which would exclude any of the people.

The “keep quiet because you’re in the minority” argument suggests that Christians would be willing to listen to prayers to Allah or Rev. Moon if Moslems or Moonies should achieve a majority. Yet, this doesn’t jibe with their claim that America will fall into the pit if they fail to subjugate it under a Christian version of Sharia Law. So, no, I will not keep quiet. I can but hope that I will never have to sue to be free of other people’s religion. But if I do, I can at least take comfort in the fact that it will be in a liberal city in Oregon instead of in what Sarah Palin called “the real America,” by which she meant those rural areas in which people consider “book learning” the enemy of “common sense,” and believe that God wants them to bring misery into the life of anyone who holds different values than themselves.

When I think of such people—among whom I lived for 36 years—I can but wonder why those who are too stupid to use proper grammar and spelling when emailing unreasoning venom to their opponents, should be so arrogant as to imagine that they are God’s chosen people, the best people on earth; that heaven is going to be populated by people just like them; and that heaven’s residents are going to spend eternity watching their enemies writhe in agony in the lake of fire that their God of Love created. Forget China, Iran, North Korea, and Islamic extremists, America’s enemies are within its borders, and they march under the banner of Christ.

The question is, can they succeed? No, at least not to the extent they would like, because they don’t have the broad support. Where they’re in the majority, they’re tyrannous, but they’re not in the overall majority, and the harder they push, the more they’re going to be pushed against. That said, they are extremely powerful, and just as the National Rifle Association wields a power far greater than its numbers, so do militant Christians. Yet, the numbers of Americans who consider themselves non-religious is mushrooming (21% last I heard), especially in people under 30. Unless something happens to turn that around, secularism will win. It might not be in my lifetime, but Christianity will eventually lose its clout, and I believe its awareness of that possibility is why it has become so aggressive since 9/11.

Photo by Will Kuhns