Ataraxia, the only true happiness 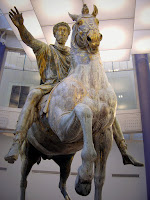 He’s dead, he’s dead,
Hooray, hooray;
His surgeon killed him yesterday,
But his life insurance will quickly pay,
And with his doc I’ll gladly lay.

Oh, I think we’ll go to Borneo
Where there’s little risk of seeing snow,
And the brush it grows extremely low,
And wild, wild parties will we throw!

by the former Mrs. Snow

Actually, it was by the husband of the woman who got up every hour last night to ice his shoulder. Hopefully, you knew that. Such humor sets very poorly with people who don’t get it.

After reading what I wrote on Thursday, you might be challenged to believe that I went to bed feeling positive—almost cheerful—but I did. Your support was largely responsible, as was the support of local friends. I also sought the wisdom of Epictetus. The ancient Stoics, especially Marcus Aurelius (see photo), have often comforted me, and the worse off I am, the more effective is their counsel. As we turned out the light, I told Peggy that I had found my courage, as indeed I had. I even refused the “nerve pill” that I was offered at the hospital.

The surgery lasted two and a half hours, and Peggy was told that it went well. I awoke sometime later, eager to come home.

I worry that I am expressing myself poorly because of the drugs, and I am having a devil of a time typing in this sling, but I wanted to check-in, and I surely owed it to you to do so.

I send to you my deepest appreciation for your kindness, freshly showered by tears of gratitude.
Posted by Snowbrush 15 comments: