I'll show you my dog in a string bikini if you'll show me yours. 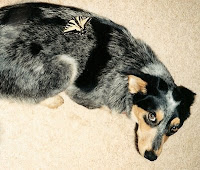 There are days—this is one—when I feel terribly guilty for not doing something (i.e. work), yet the guilt isn't sufficient to inspire action. I have a physical therapy appointment at 1:00; the dogs have to be walked; some light housework has to be completed; and supper must be planned and prepared. Other than that, nothing HAS to be done, which is why I have spent the past two hours reading other people’s blogs. Cat Woman alone could become a halftime job, and she doesn’t even follow my blog.

I say to myself, “Snow, you spend enough time reading the blogs of your followers. For god’s sakes, stop reading the blogs of people who don’t follow yours.” I have cut back, but some blogs are just too good to drop. Besides, I’ve noticed that not everyone who follows my blog appears to actually read my blog. I’m not even sure that one of my followers speaks English. It’s creepy having him there, but I can’t think of any good reason to block him (he left as I was writing this).

As a follower of other people’s blogs, I torture myself over who to drop and who to keep. Yesterday, I dropped the blog of a woman who I didn’t think would miss me. She did. She came to my blog to ask if I had been offended by pictures of her dogs wearing clothes. I was astounded that she would think I went away mad because she dresses her dogs! Why would a man who puts string bikinis, tawdry “nurses’ uniforms,” and fishnet stockings on his blue heeler care if she dresses her poodle in firemen’s hats and ski bibs? Now, I feel guilty for hurting her feelings. It’s not that I didn’t like her blog; it’s just that she never came around to mine, so I started to feel like a one-way friend. I wanted to tell her, “If you follow my blog then I’ll follow yours.” That would have been the truth, but I figure that if people don’t decide to follow me on their own, I would be amiss to ask them. It’s like a lot of situations I run into. I feel bad if I say what’s on my mind, but I also feel bad if I don’t.

Besides, how many followers do I want? I’ve visited blogs that had fifty followers. This means that every post draws maybe twenty comments followed by fifteen responses from the blogger followed by ten more comments from the readers. Jeez, talk about having your life taken over by the Internet! But too few followers aren’t good either. Prior to this blog, I had one pretty much like it for two years during which time I had zero followers and only two visitors. I concluded that I was wasting my time, and deleted it.

Then I started this blog, and I thought that, well, it’s not fair to feel bad that no one reads my blog when I don’t read anyone else’s. So, I started checking out other blogs by hitting the “Next Blog” button. You can waste a lot of time doing that because of the immense number of blogs in foreign languages as well as blogs devoted to needlework, grandchildren, and vacations. The funny thing is that, gauged by their lack of response, some bloggers don’t welcome visitors. When I say, “Hi, I’m here,” and they just sort of look the other way, I say, “Well, okay, bye.” One person closed her blog to visitors right after I found it. She apparently had no clue that someone might stumble upon her.

But back to the point I was trying to make. I visited other people’s blogs mostly to attract them to my blog, but I discovered that I enjoyed a lot of the blogs that I visited so much that I was posting less to my own. I began following them, and some of their authors followed me, and then I saw that some of them were also posting to other blogs that I was following. This made me realize that the blogosphere consists of overlapping circles (I suppose you already knew this). I also realized that some people enjoy reading blogs although they themselves are not bloggers. They’re the ones who post comments, only when you click on their link, there’s nothing there.

I debated for a long time whether to share my blog address with people I actually know (since they’re the ones I write about). I finally did and, lo and behold, only one of them ever bothered to drop by, so far as I’m aware. Now, I’m sorry I told them, because I never know whether they’re there or not. Maybe I should make up all kinds of juicy things about their sex lives in order to flush them out. Yeah, that’s a plan. Stay tuned for stories about what happened when Susan and her iguana met Barry and his pomegranate at Meagan’s Tupperware Party….
Posted by Snowbrush 17 comments: