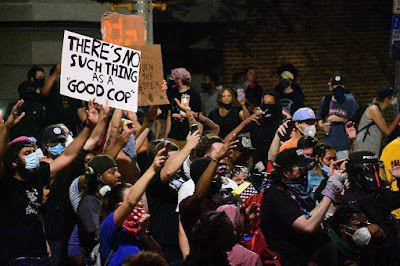 I believe that George Floyd was murdered, which means that I was onboard with the protestors. Then came huge demonstrations in which policemen were assaulted, Molotov cocktails were thrown, businesses were looted or burned, and social distancing was ignored; and I began to wonder if the demonstrators reserve arson, looting, vandalism, and violence, for themselves alone, or if they would allow the same rights to everyone who feels strongly about an issue.

Next came calls for defunding or abolishing the police followed by outrage over the Atlanta killing of a black man who forcibly stole a cop's stun gun and fired it at him. After that came the toppling of statues of Spanish explorers, Confederate soldiers, Union generals, George Washington, U.S. Grant, Thomas Jefferson, the creator of America's national anthem, and unknown others. Among Eugene's statuary casualties was a University of Oregon work called Pioneer Mother and another entitled simply The Pioneer (some emotionally fragile students explained that the statues so offended them that they had been forced to walk out of their way to classes to avoid seeing them). There are three oddities about the attack on these statues: (1) Although the vandals clearly feel superior to the people who came here over the Oregon Trail, they showed no remorse for the fact that they too live on land stolen from the Indians. (2) The U of O was already considering the statues removal. (3) Pioneer Mother was meant to correct the gender inequity of previous statues, suggesting that the effort of yesterday's liberal intellectuals to create a better world are only worthy of destruction in the eyes of today's liberal demonstrators.


When I reflect upon the demonstrators' words and actions, the following seems evident: their contempt for the law; their embrace of mob rule; their belief in easy fixes; their refusal to compromise or dialogue; their unwillingness to consider that they might be in the wrong; their labeling as racist those who disagree with them; their confidence that had they lived 50-250 years ago, they would have held the same values they hold today; their failure to consider that their descendants might judge them as harshly as they judge their ancestors; their refusal to accept responsibility for taking the law into their own hands; their belief that there is only one way to be moral, and that they alone have virtue to follow it; and their blind faith in the belief that the police are criminals, the criminals are victims, and the gateway to a better world lies in firing the police and emptying the prisons.

In my view, these people are petty, childish, shallow, vicious, vindictive, hypocritical, cowardly, intolerant, unintelligent, unimaginative, and puritanical. Rather than interpreting the overwhelming bi-racial outrage following George Floyd's death as a hopeful sign that the nation is ready for change, they instead assume that the masses are irredeemable bigots who must be forced into change through violence and intimidation on the part of such enlightened beings as themselves. As occurred during Mao Zedong's Cultural Revolution, these youth seem bent upon sweeping the countryside like locusts for the purpose of devouring the old in the certainty that whatever values that they, in their twenty-year-old wisdom, can't understand and appreciate aren't worth understanding and appreciating. If their energy holds, I can but assume that when the demonstrators run out of public statuary to destroy, they will turn their purification efforts to street signs, libraries, art museums, churches, and graveyards, and whatever else offends their readily offended imaginations.

God help those of us who live in liberal areas that are ruled over by gutless local governments that refuse to act in the face of mob rule, and god help the entire nation for having a swaggering president whose remedy for every bad situation only ends in making it worse.
Posted by Snowbrush 23 comments:


I lived in Minneapolis for two winters. At 3.3 million, its metro population is greater than the entire state of Mississippi where I spent my first 36-years, and of Eugene, Oregon where I've lived for 32-years. Eugene and Minneapolis are alike in that their populace is educated, secular, affluent, and Democratic (or, as Trump would say, strongly Democrat). By contrast, Mississippi is staunchly Christian, strongly Republican and leads the nation in poverty, ignorance, obesity, oppression, and early death.

My mother condescended toward black people, but my father treated them well, as did I considering my immaturity and ignorance. Although he went to an all black school, my best friend in high school was a black boy named Jerry Kelly. When my white friends and I went camping one weekend, Jerry went too, and when my father and I went camping 400-miles from home, Jerry went too. The South had an unwritten code about what a white person could do with black people and what he or she couldn't. For example, when I was in high school, my white friends would simply walk in on me without knocking, but Jerry wouldn't have dreamed of doing such a thing, and when my white friends and I drove around town drinking, Jerry wasn't invited.

The only bad moment, racially speaking, that I had with Jerry occurred when we were running my father's 115 mile paper route. Most days, my father and I ran the route together, him driving and me throwing papers, but some days, we would hire Jerry to replace one of us. On this particular day, I told Jerry to go into a cafe to collect for the paper. He said he didn't want to go because the cafe was run by white people (black people couldn't enter white-run cafes, although some such businesses had side windows for their black patrons). Being infinitely more naive than Jerry, I assured him that there would be no problem since he wasn't there to order. So, in he went, and, seconds later, out he came, closely followed by a raging white woman.

Much of my prejudice toward black people didn't come from living in Mississippi but in Minnesota where gangs of belligerent black teenagers would stalk downtown streets, daring white pedestrians to remain on the sidewalk. I also encountered groups of loud and aggressive black people on city buses. I came to regard them as hyenas, a perception that returned this week when I watched black mobs looting white-owned stores.

My Mississippi hometown had its last lynching in 1953, when I was four, and a previous lynching in 1928, when my father was in his teens. In the 1928 lynching, a mob took two brothers from the city jail, shooting one, and dragging the other behind a car before hanging his corpse from a tree.

When I was young, I romanticized people who didn't fit society's norms. For example, I sought out the friendship of homosexuals and black people, and I was captivated both by the Freedom Riders and the Weather Underground. Because I valued appearance over substance, I was even drawn to groups that sought one another's annihilation, for example the KKK and the Black Panthers. I also loved snazzy uniforms, and so I favored the looks of Confederate soldiers over the Union, and of the SS over the Allies. Although I felt superior to people who brainlessly hated what their neighbors hated and loved what their neighbors loved, my values were equally shallow and a lot less consistent.

My British and Australian readers know about the murder of George Floyd, but they might not know about a New York City white woman named Amy Cooper who called the police to report that she and her Cocker Spaniel were being physically threatened by a middle-aged black bird watcher who objected to her dog being unleashed in a Central Park area set aside for wildlife.* Once she was on the phone, Ms Cooper worked herself into the appearance of hysteria, all while the black man filmed her performance. After being fired from her $175,000 job with an investment firm, Amy Cooper botched multiple apologies so badly that she finally hired a PR firm. For example, she had sought to minimize her behavior by claiming that, "Words are just words," and "I didn't intend to harm that man in any way," and she even tried to win the public's sympathy by saying, "My entire life is being destroyed right now.” Does the Me Too movement's insistence that women are too pure to frame men ("Believe the Women") include the Amy Coopers of the world, and does it really hold that no black man ever came to a bad end because of a white woman's lies?

Although local bumper stickers laud diversity, Eugene is hardly diverse. Black people and Asians are rare, and Hispanics are too poor--and too afraid of ICE (Immigration and Customs Enforcement)--to engage in politics. Even so, white Eugenians have been out in the thousands (the largest protest reaching 10,000**) protesting the Floyd murder, and they've been at it for more than a week, during which several businesses were vandalized. The spectacle of white crowds in a white city shouting insults at a white police force 2,000 miles from a black man's murder strikes me as impotent, and I even wonder the extent to which the size of the protests (not just in Eugene, but in the nation and the world) has been fueled by hatred for Trump and frustration over Covid lock-downs. Whatever the truth about this, Covid deaths can be expected to mushroom, especially among black people.