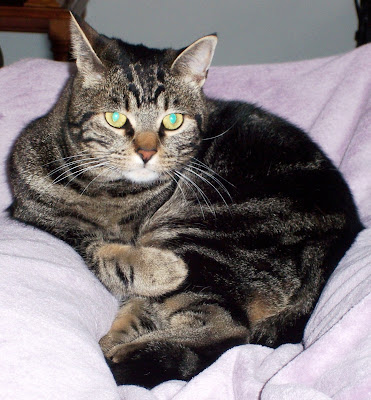 Have I mentioned that Brewsky is the brains behind this blog? That’s right, he’s the dirty little drugged-out, lazy-ass, nihilistic, philandering atheist dip-shit who is an affront to all that is decent, whereas Peggy and I are perfectly delightful people who faithfully attend—and give generously to—The Church of the Holy Bejesus of the Misconception, Mississippi Synod. My sole contribution to this blog is to type what Brewsky tells me, and he only needs me for that because he hasn’t been able to locate a keyboard for cats. If he ever does, he says he will run his own affairs via the Internet and have us declared incompetent so he can take control of our money (if you want loyalty, get a dog).
However, I’m writing this post to ask for your help because Brewsky is in the hospital. We took him to the Pussy Galore Emergency Medical Facility and Sanitarium at 4:00 this morning when he sneezed slightly. His first vet demonstrated complete incompetence by asking about his other symptoms. “He sneezed!” Peggy screamed. “Would you ask an unmarried pregnant teenager who had been cut in three pieces by a train what her other symptoms were?! For God’s sakes, either save our cat or get somebody who can!” Let me tell you, that vet disappeared out of the room so fast you would have thought that she was being spanked with a veterinary board. Her last words were, “Don’t go nowhere; I’m sending in the clinic’s MMTB specialist.”

We had no idea what she was talking about, but we really liked the next vet all the same. His name was Dr. Pander (one of the techs said that his parents named him after a Liechtensteinian Polar Bear), and he got right down to business by running a credit check and a discovery of assets. When they came back satisfactory, he started an IV, ordered a gazillion x-rays, a half-dozen blood-tests, three stool cultures, two MRIs, a CAT Scan (ha), a bariatric enema, and a couple of other tests that we had never heard of, a ScrLk and a PrtScn. Once he saw the results, he shook his head sadly and said that Brewsky had ACD (Advanced Cannabinoid Dementia) from second-hand smoke and would need a four-month hospitalization in ICU followed by a year of outpatient therapy.

We were desperate to know what Brewsky’s chances were, and were comforted when the doctor assured us that if we had the money to spend, he was 200% certain that he could save our cat. Now, we just have to raise $23,999.99 for a down payment on Brewsky’s treatment, and that’s where you come in. Please don’t make us beg because the moneys not for us; it’s for him. Otherwise, we would be glad to beg because that’s just the kind of people we are.