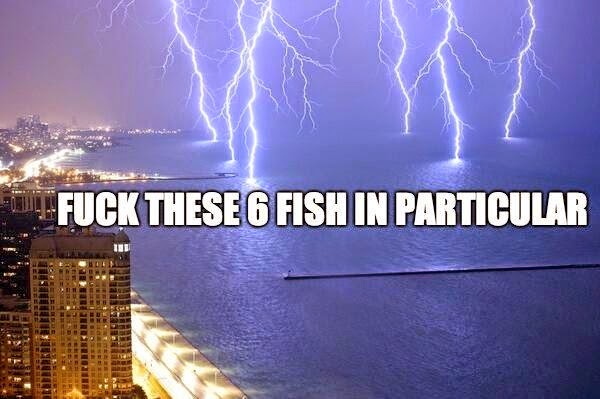 I think most people—though not most fish—would agree that it would be astonishingly arrogant of fish to imagine that their tribe had been singularly made in the image of God, were under God’s orders to “subdue the earth,” and were so beloved by God the Father that he sent his only begotten fish son, Jesus Christ (who is fully himself, and fully God the Father, and fully God the Holy Ghost, although fully separate from the last two, though not, presumably, fully separate from himself), to die for their “sins,” so that God (meaning, I suppose, all of God, although the Bible talks as if it’s only the Father) wouldn’t have to fry them, as it were. Yet, millions of members of our species say this very thing while somehow imagining that they’re wise and humble for doing it, and that the sin of foolish arrogance rests on the shoulders of doubters because of their brazen refusal to blindly believe that their species is so wonderful that a deity died to save it and that nothing can happen to them but what it is for their benefit.

In the Episcopal Church, we don’t pray for the earth or any of its non-human inhabitants (not even fish), but we do pray for every human being the whole world over, most especially for ourselves and our three bishops, though not for our priests (although most of us would be much less distressed if the Bishop of Oregon got cancer than if the same fate were to befall our local priest, even if it did give him some good sermon material). We also pray for world peace, undeterred by the fact that none of us, probably, has a hope in hell that it will happen. We likewise ask forgiveness for our sins (I obviously have an above-average need for this), and not just the ones we’ve personally committed either, but also the ones done on our behalf, presumably by our government. Yet, we ignore the fact that, if we really, really wanted to put an end to the government’s sins (at least the ones done on our behalf), we could do it ourselves by refusing to pay taxes. Truly, it’s better to turn some problems over to God.
Posted by Snowbrush 15 comments: