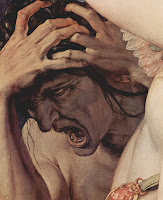 Monday, April 5: I see my internist (Kirk) for my yearly physical and tell him about the sunburn-like pain in my lower leg bones. He thinks it’s the early stage of a rare and devastating disease called CRPS (chronic regional pain syndrome), and orders a bone scan. I know someone with CRPS, and have often comforted myself with the thought that, as bad off as I am, at least I don’t have THAT. I learn from the Internet that the disease is progressive and incurable in the absence of early treatment or spontaneous remission. I also read:

“At an advanced stage of the illness, all patients develop significant psychiatric problems and narcotic dependency, and are left completely incapacitated. Some commit suicide.”

Thursday, April 8: The bone scan people haven’t called to schedule an appointment, so I call Kirk’s office. Trinity tells me that the paperwork is in process.

Friday, April 9: I call again, and again Trinity tells me that the paperwork is in process. I ask to speak to whoever is handling “the paperwork,” and I get Casey’s voice mail. I leave a message, but she never calls back.

Monday April 12: Trinity tells me the same thing, so again I ask to speak to Casey. I leave a second message on her voice mail. Becky calls back, and repeats the line about paperwork in process. When I ask “what paperwork?” she says Kirk’s signature. “When will he sign it?” I ask. She says she doesn’t know, that Casey is in charge.

Tuesday April 13: I call a fourth time and am told the same thing.

Wednesday April 14: I set my alarm so I can be there when Kirk’s receptionist opens the door at 7:00. I hand her a letter marked “please deliver immediately.” In it, I remind Kirk that this is a very serious disease, that treatment within the first three months is vital, and that my symptoms appeared two months ago. When I don’t hear anything by noon, I call the bone scan office and make an un-referred appointment for the next afternoon, which I anticipate having to pay for myself.

That night, I read on the Internet that a special kind of bone scan (called a triphasic) is the diagnostic test of choice, but my appointment is for a Dexascan, which is the only kind I knew existed. I call Kirk’s office the next morning to ask what kind he ordered. Becky says he ordered a Dexascan. I ask if she is certain, and she says yes. “Why has it taken so long for an urgent referral to go through that I had to order my own test?” I ask. She says that Kirk didn’t mark it as urgent and implies that, as a result, all my efforts to speed things along were wasted. The pain has now spread into my thighs.

Thursday, April 15: I get my Dexascan, and learn from the technician that it is almost certainly the wrong test. I anticipate changing doctors, but I’ve been with Kirk fifteen years and have always considered him a caring doctor and an excellent diagnostician, albeit one with a sometimes difficult staff. Also, it’s a sorry-ass time to start with someone else, so I make an appointment to see him the next day.

Friday, April 16: I ask Kirk if he got my letter. He says he didn’t, so I tell him that I gave it to the receptionist who, as I had since learned, gave it to Becky who gave it to Casey. He apologizes repeatedly and effusively, promises that such a thing will never happen again, and goes looking for the letter. Casey has it.

He reads the letter in my presence, and notices that Casey had me down for the wrong test. I WAS supposed to get a triphasic scan. I ask how soon he can arrange the test, and he says he will shoot for Monday. He calls the nuclear imaging department at the hospital, and they tell him that I will have to wait until late next week at the earliest because the radioactive isotopes used for the test have to be ordered fresh from Iceland. I ask him if I can get it done sooner at Oregon Health Sciences University in Portland. He says no, that they would still have to order the isotopes fresh.

I point out that the isotope test is inaccurate 55% of the time, and suggest that he go ahead and start treatment based upon his tentative but confident diagnosis. He says the treatment might foul up the test results. He also disputes the idea that there exists a three-month window.

I tell him that I got my physical therapist to send a referral to a pain management specialist since I anticipated an anesthesiologist or a neurologist overseeing my CRPS treatment anyway, and that I had already made an appointment. He approves of the clinic to which my physical therapist referred me.

I say that I would prefer a disease that would kill me to one that might force me to kill myself. He advises that I not focus on the worse-case scenario.

Eleven days after I first saw Kirk, the wait for the right bone scan begins again.
Posted by Snowbrush 45 comments: