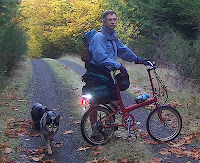 I bought a bike light today. Of my seven wrecks in the past fifteen years, two were caused by hitting obstacles in the dark. Of the others, excessive speed caused one; inadequate speed caused two; and dogs caused two.

Ninety percent of bike fatalities are male, and a wreck every two years is more than I can walk away from indefinitely, especially now that I get hurt more easily and don’t heal worth a damn. My problem is that I like to go fast. If I can cross an intersection a hair’s breadth ahead of a speeding car, I’ll do it. If I can take a minute off my cross-town time by tearing through unlit parking lots and alleys, I’ll go for it. I wouldn’t say I’m exactly compelled to speed, but I would feel like a namby-pamby if I slowed down.

Eugene is a great city for maniac bikers because cops mostly ignore you unless you actually collide with them. I hear of people getting $250 tickets for running stop signs, and I know someone who got a ticket for failing to yield the right of way to the car that hit her; yet I rarely see a bike stop for a red-light if nothing is coming; and I regularly see them tearing down pedestrian filled sidewalks, speeding the wrong way on one way streets, passing cars between lanes of traffic; and behaving in other ways that are as reckless as they are obnoxious.

Eugene is also one of the country’s most bike friendly cities in that is has numerous bike lanes, bike racks, bike cages, bike thoroughfares, and bike awareness. When I moved here, I was freaked out by all the bikes because they were smaller than anything I was used to looking for. They seldom had lights; came out of nowhere; never gave signals; and behaved erratically. Now, I am very careful to watch for bicyclists because I know that a large percentage of them are idiots. Consequently, a large percentage of motorists regard them with contempt.

It doesn’t help our image when large numbers of bikers get together and ride abreast down busy streets, purposely creating traffic jams. (Their goal is discourage the use of cars.) Last year, they delayed an ambulance, and this led to public outrage and the issuance of massive numbers of tickets at subsequent events. This in turn led to biker accusations of police unfairness, partiality, and even brutality; so the cops have again backed off.

Eugene is also one of the world’s capitols for bike theft. My last bike light was stolen without its mounting bracket. I had left it on my bike with the assumption that no one was likely to steal an easily detachable light from a practically non-detachable bracket. Since then, I’ve learned that it happens all the time. On another occasion, I had my front wheel stolen, and it’s not unusual to see securely locked bike frames from which every removable part has been taken.

If a business allows patrons to take their bikes indoors, I take my bike indoors; and if I were to buy a new bike, I would deface it to discourage thieves. As it is, I take comfort in the fact that my ten-year-old UniVega is not high on the crooks’ shopping list. It would still be stolen if I didn’t take pains to protect it, but at least I don’t have to take extreme measures. People with new and expensive bikes often use them for recreation only, and keep an old clunker for commuting around town.

Peggy got rid of her bike a decade ago after a wet grate caused it to slide out from under her. She wasn’t hurt much, but she was so shaken that she was still sobbing when she got home twenty minutes later. She felt even worse because, of the many witnesses to the accident, no one offered to help. She only bought a new bike this year because we can no longer hike together.

Peggy is not as good at judging the speed and distance of oncoming cars as I, and I’ve worried for years about her walking to work much less biking (the hospital is twenty blocks and several busy intersections distant). I’ve been pleased to observe that she shows good sense without excessive caution. My theory is that the years she has walked have greatly improved her ability to judge speed and distance.
Posted by Snowbrush No comments: