Fools make a mockery of sin, so be sure and invite a few to your next party 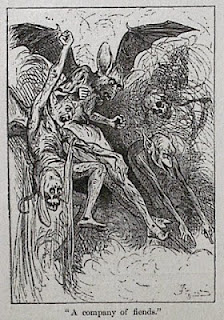 I just joined a new atheist group because my old one was too much talk and too little partying. In the new group, people like to get drunk and play Strangulation (that’s what we're doing in the picture). If you win, you get to strangle real puppies and kittens while everyone else laughs so much that they cry and roll around on the floor. Because atheists don’t have God telling us what to do, we’re not uptight all the time, so we can do that kind of stuff and have fun with it. That’s what I love most about being an atheist—that and getting to spend Sunday mornings sleeping off hangovers.

Here’s what inspired me to write this post. The other day, Peggy wanted to take off from work to go to a picnic. She’s been to this same picnic every year for something like 20 years, but she forgot to put in for time off, and she couldn’t get any of the other nurses to swap with her, so she was all bummed about it. The other nurses and I said, “Well, duh, just call in sick, doofus.” Of course, Little Miss Goody-Goody wouldn’t do that. “My middle name is Integrity,” she purred with a self-congratulatory smile. Just so you’ll know, she really said this, but she probably just said it to me because she wouldn’t have wanted to risk making the other nurses mad by saying it to them, whereas she wouldn’t give a rip if she made me mad. As it turned out, she didn’t make me mad, but she did make me laugh my ass off. Ever since then, she’s had to listen to me call her Ms Integrity in a snide voice a hundred times a day while pointing and snickering, and that’s starting to make her mad—not that I give a rip.

To tell you the truth, I’ve never seen it as a case of her being Ms Goody Two-Shoes and me being Mr. Slug Shit from Hell, although she looks at it that way. When she gets on my case, I say, “Peg, coming home drunk at 4:00 a.m. with a drunk woman on either arm and a trunkful of stolen drugs and money isn’t immoral, it’s alternatively moral—for an atheist, anyway. Hell, what do we care? If you’re just dead when you die, go for the gusto. Rape, kill, and mutilate if that’s what it takes to get your rocks off. Know what I mean?”

No, Peggy doesn’t know what I mean, yet she doesn’t believe in the supernatural anymore than I do. What’s up with that? Why couldn’t I have married a drunken party-girl/puppy strangler like all my infidel buddies? Why did I have to get stuck with Ms “Integrity is my middle name”? That right there is proof that there’s no justice in the universe and therefore no god in the universe either.

If this weren’t a clean blog, I would say a dirty word about now, but then people might start praying for me again, and I would just hate that. It’s bad enough having Bible verses thrown at me, but at least I can throw them back (they might not get resurrected after three days, but they do start smelling like fish), but I can’t throw a prayer back. Besides, prayers make my head spin in circles while I spew garbage cans full of green vomit onto the walls, and when that happens, I always wake up the next day with a sore neck and a lot of housework. Bible verses don’t do that. They do make me break out in pentagram shaped hives that itch like the devil, but Benadryl clears those hives right up. If not for Benadryl, I would have to get an exorcism, and it would scare me to do that because the preacher might decide to burn me at the stake instead.

Anyway, I just wanted to go ahead and admit that you Christians are right about us atheists not caring what we do to other people as long as it feels good to us. Like right now, I would trade the lives of 27.5 million people for a bowl of ice cream. To you, that might make me seem like a bad person, but I don’t see it that way because I would really enjoy that ice cream. Now, if I were willing to simply give away the lives of all those people without getting any ice cream, that would be bad because it would mean that they died for nothing. So you see, my morality is every bit as good as your morality but in a slightly different way.
Posted by Snowbrush 17 comments: