When my mother died 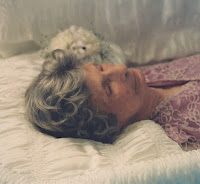 My mother would become infuriated when I smoked marijuana, so I did it in front of her every chance I got. I was that way about everything that infuriated my mother. My sister was the opposite. She too did all kinds of things that seriously displeased our mother (our father didn’t care what we did), but she would lie her way out of them whenever she could.

When my mother died—in 1988—they brought the body to the house, and I sat beside her, smoking pot, in a one-person wake. I didn’t think I could bear letting her go, so I hoped I could rise to some plane where she still existed, or at least hallucinate her, but the closest I got was when I heard her gasp for air. At that moment, I thought I had done it. I thought she was going to open her eyes and talk to me, but she just lay there, not really looking much like herself.
Posted by Snowbrush 22 comments: