I saw Satan today while eating a granola bar in front of Jerry’s Lumber Company (and, no, I’m not trying to fool you into thinking that pink taffy is a granola bar). He was a distinguished looking man of 70 in black pants, black shoes, a black coat, a black fedora, and carrying a black mug. I wanted to yell out the window, “Hey, Satan, is hell still under a heat advisory?” but was afraid it would embarrass him, what with it being commonly known that Satan is a shy demon. What did he look like? He looked like an open and cuddly version of Dick Cheney. (During the reign of GW Bush, I sometimes wondered if Satan was dyadic, with Bush being Dumb Transparent Satan, and Cheney being Sadistic Conniving Satan, and them both being bloodthirsty because they hate one another and take it out on us.)

Finished with my granola bar, I went into the store and specifically into the store’s male restroom where I sat down to rest with the hope (but not the prayer) that no one would come in and stink the place up. While I rested, I got to thinking as follows: Peggy has never let me teach her the first thing about managing her own finances…. Peggy’s refusal to learn about finances means that I control every penny Peggy has including her workplace retirement. Peggy can’t even get into her own accounts without my help…. My next blogpost will definitely say: “Hello from sunny Acapulco. I took Peggy’s money and ran away with a twenty-year-old blond called Taffy because her limbs are so charmingly flexible. ‘You couldn’t get a twenty year old,’ you say? Ha! With Peggy’s money and my drugs, I would say that I made-out okay. Hee, hee, hee.”

Done resting, I left the restroom and proceeded, first west, then north, and then west again into the main part of the store where I headed (as I always do, no matter what I’m really there for) down the indoor and the outdoor plant aisles, talking friendly-like to the plants while people stared admiringly. I don’t buy indoor plants anymore, because I don’t have room for the ones I already own, but I saw a Rex Begonia, and I just knew I was going to make an exception, and I was right (it’s a lucky plant that comes home with me, unless it dies). 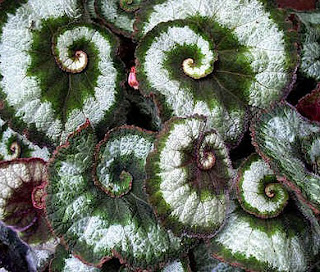 When Rex and I got to the checkout, the 20-year-old blonde checker said that Rex Begonias are her favorite plant, and that’s when I heard the theme music from The Twilight Zone because I knew that her and me coming together like that had to be more than a coincidence, and I became a theist on the spot. Right away, I knew I should leave Peggy and marry that woman, but then I remembered Peggy’s money which I hadn’t stolen yet. Then, I got to wondering if maybe the woman’s name was Taffy. “Are you Taffy?” I asked. “No, but my boss calls me Daffy because customers often complain that I charged them twice for the same item.” Upon hearing this, I went back to being an atheist and drove home embittered.

I could rattle off stuff like the above constantly because it portrays how my brain actually operates as I overlay reality with imagination, something which I do all day long.
Posted by Snowbrush 29 comments: