The saying goes, “The most personal is the most universal,” but maybe that’s not true if you’re insane. 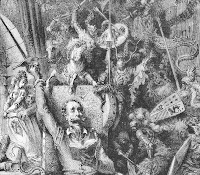 My atheist group had a picnic in the country today. I had said I was going, but changed my mind a few hours before it started because I’m always ambivalent about events that include more than ten people. Then someone offered me a ride, so I went after all.

My relationship with groups is ever fraught with angst, but this group more than most because I went from being its de facto leader to only attending an occasional meeting, a change that didn’t occur because I was a happy camper. Yet, I attend no other group; I know most of the people in this one; and I do retain some semblance of status and familiarity. I got the feeling today that I could step back into a leadership role, and people would welcome me, and that was good to know, but, then again, maybe they were just being polite. Part of why I’m so tormented about groups is that I have no faith in my perceptions. Other people seem as alien to me as if they were from another planet, which is one reason that my blog is so important. Here, I can share feelings that I share nowhere else, not even with Peggy (although she reads my blog).

After my nightmarish marijuana overdose last weekend, I’ve been having problems handling even one hit of the drug, so what to I do just before the picnic, but eat a half teaspoon of leftover marijuana butter so that I could clean the container. Maybe that wasn’t a good idea; I don’t know. All I know is that as the picnic went on, I became way too high, so in order to mellow out, I drank wine, but that just left me drunk and high. I kept using use the wrong words for what I meant to say, or else screwing-up the pronunciation of the right words. Oddly enough, one of the other men had suffered a stroke, and he was doing the same thing.

Now, I’m home and still way too wired. I feel stupid when I don’t see these things coming, but in my defense, I ate 3½ tsp of marijuana butter last week when things got so bad, so I had no idea that a mere half tsp would hit me this hard. And maybe it didn’t. Maybe I’m just fucking insane. I couldn’t even screw up the courage to open my mouth at the last meeting of this group (on Wednesday), and there I was today unable to close it. At least I didn’t rattle on about myself—I don’t think I did anyway—because I was much more interested in what other people had to say. I drew them out as best I could, and when one woman mentioned that something I had written made her think I didn’t want her in the group anymore, I instantly burst into tears for having pained her so.

Later, I almost cried a second time, although I don’t remember why. I was almost unbearably present emotionally, and unless I’m in a group where such behavior is expected (and I’ve been in many such groups), that’s frightening. It was where I had to be though. Someone would say something, and I would ask them a personal question about their feelings about what they had said—the kind of questions that most people wouldn’t dare to ask. That’s always risky, but if I can do it well, it makes for a more interesting dialogue. My guess is that I do it pretty well, but again, I don’t trust my perceptions about much of anything that has to do with other people... Right now, I wish I could chill-out because I am still feeling way too intense (imagine having the caffeine from twenty cups of coffee injected into your vein while at the same time you’re shooting skyward in an incredibly fast elevator). I can barely type because I’m trembling so.

Okay okay, I admit it. I knew what could happen when I ate that pot, and I did it anyway. Pot can make me feel positively insane, and that’s one reason I like it. It’s also why I’m especially prone to do it in a social situation that—given how insecure I am—makes me feel insane anyway. Why yes, this does make me sound like I enjoy bashing my head against a wall. On one level, it’s stupid, but then so are ultra-marathons and base-jumping. Hundreds of things seem stupid to people who don’t understand them. Of course, with pot, the risk isn’t to my body but to my sanity—at least it feels that way sometimes because, after last weekend especially, it’s as if pot has burned a conduit from my brain straight down to hell. Maybe you’re understanding me, or maybe you’re appalled. Peggy is appalled. She’s 100% for medical marijuana as long as it’s for a medical purpose, but I’m often tempted to use it at other times too—like before going to a social gathering at which everyone else is apt to be straight. It’s as if I looked at what might prove to be the worst thing I could do, and I did it. Can you relate to what I’m saying?