Off we go, into the wild blue yonder... (from the US Air Force anthem) 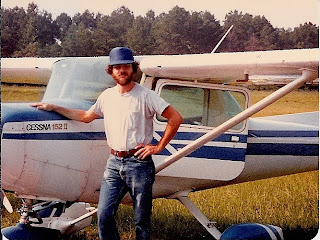 It’s easy to get an airplane off the ground once you get used to steering with your feet and working the gas with your hand. The hard part is getting the plane back onto the ground. Most student pilots do their first solo after 15-20 hours of flying, but I knew a guy who never soloed,  and I didn’t want to do it either, but my reasoning went as follows: (1) I can probably get this plane back onto the ground without killing myself and without too much damage to the plane. (2) If I refuse to solo, I will be a coward, and I will be disrespecting my instructor’s judgment of my readiness. (3) I have no choice but to solo. (As I prepared to taxi onto the runway alone for the first time, Peggy came running over and asked for my car keys because she had left hers at home, and wanted to be prepared in case mine ended up in a tree somewhere.)

Twice, during my brief flying career, the engine quit, and I had to make on-field emergency landings. Another time, I smelled smoke from an electrical short, and had to make another on-field emergency landing. On a third occasion, I accidentally put myself into a spin while I was doing something that my instructor had warned me against doing alone—practicing approach stalls. Back then, at least, most VFR pilots (the lowest level of pilot; Visual Flight Rules as opposed to Instrument Flight Rules) weren’t taught spin recovery, so when the plane’s nose instantly went from pointing 20° upward to 85° downward and the ground started spinning up at me, I got busy trying to remember what I had read on the subject. If I had been a poor student, I might have died, and I never got over that fact, although I kept flying. Indeed, the first thing I did after I got myself out of that spin was to regain altitude and do another approach stall. After I recovered from it, I flew back to the airport, made a bad landing, and found that I was having a little trouble walking.

I now feel stupid for having done that last stall, but most young men live by rigid rules regarding courage, and can torture themselves for years if they break one of them. This means that it sometimes seems easier to a man to get out of a bad situation by risking death than by playing it safe and having to live with doubts about his courage—and therefore his manhood. (This naturally raises questions about what constitutes courage. After all, if one man charges into machine gun fire because he fears censure more than death, while another feigns a mental collapse because he fears death more than censure; who is really braver?)

After I logged about 200 hours, I sold my one-sixth interest in a Cessna 150 because I was preparing to move. By then, I had learned three things about flying that kept me from going back to it. One, if you live in the American South and you fly a small plane VFR, you can never count on making it back home in a timely manner if you travel very far because the area is so prone to overcast, scattered thundershowers, and 250 mile long thunderstorm fronts (These fronts are too high to fly over, and no one in his right mind would fly a small plane within thirty miles of one because of the likelihood of being hurled 35,000 feet into the air, having his wings snapped off, and then being slammed into the ground). Two, it costs a hell of lot to fly even if you share expenses, not so much because of the original investment in a share of some old and tiny airplane, as because of maintenance costs. The sad truth is that airplane labor and parts cost more than the same do for cars, plus the government requires frequent inspections and lots of periodic maintenance (like a motor rebuild every 2000 flight hours). Third, you’re a danger to yourself and others if you only fly occasionally, and this means that, to be a safe pilot, a person has to spend a lot of time in the air when he had rather be doing something else.

Looking back, I’m glad I flew a little, and I’m glad I survived because as dangerous as it looks, I found it to be even more dangerous for someone of my limited experience who was flying a raggedy-ass old plane. Of course, it could be that my various close calls scared me more than was reasonable, but maybe that was for the better. You wouldn’t think that adding an up and down dimension to the usual left, right, and forward, would make much difference, but it wasn’t just the up and down that was disconcerting, it was that I was moving through an unstable element. In case you haven’t been in an 1,100 hundred pound plane with a 34-foot wingspan, I should mention that small planes bounce all over the place, and the moment the pilot gets them adjusted in response to one air movement, another wind, updraft, or downdraft hits, and they have to be adjusted all over again to forces that can neither be seen nor anticipated.

Me being an atheist and all, you might be wondering if I was ever scared enough to pray. The answer is that I was plenty scared, but if you truly don’t believe, you don’t believe, so you’re unlikely to pray no matter how scared you get. I won’t say that no atheist ever prayed in a dire situation, but I’ve never known of any. Of course, it was also true that I never had something go wrong in an airplane that left me with enough leisure to pray. It’s a wonderfully focusing moment when you suspect that the only things between you and death are luck and experience, and you can’t control the former, and you have little of the latter.
Posted by Snowbrush 22 comments: