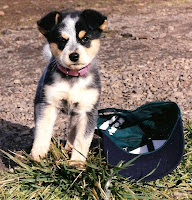 But why would your dog have a crummy life?

Many reasons. For example, I have a blue heeler and a miniature schnauzer. The schnauzer only asks for affection, but the blue heeler was born to run from sun-up to sundown. Until she got old, no amount of exercise that I could give her was enough. I tore rotator cuffs in both shoulders partly from throwing her ball with a throwing stick hundreds of times a week for a decade, yet I never threw it enough. This is why I will never have another blue heeler. It ain’t ethical to buy a dog who has needs that you can’t provide, but I had no idea what I was getting into. I knew she was a herd dog, but I thought that just meant she had the ability to run all day, not that she needed to run all day.

Her name is Bonnie. I named her that because she is beautiful. Last week, she stopped eating. I figured she was under the weather, but I had no idea that she was critically ill until Christmas day when she could barely stand. I took her to the emergency veterinary hospital, and they diagnosed her with autoimmune hemolytic anemia. Her hematocrit count was 10%, which was one point above being “incompatible with life.” The treatment estimate was $1,500 at the low end, just to stabilize her. Bonnie is twelve, which is the average life expectancy for her breed. She is also blind. Peggy was at work, but I knew that she would want to spend whatever it took. Still, I demurred until I called her.

Bonnie spent the next two nights at the edge of death. Yesterday, I was advised to take her home, not because she was doing great, but because they had done all they could for her. I was unable to shove pills down her throat with my arm in a sling, and Peggy had flown to North Carolina hours earlier, so my neighbors helped with the medication. I spent the next twenty hours desperately trying to get Bonnie to eat and drink, and watching for signs of respiratory distress. Her breathing was so slow that, many times, I thought she was dead. For hours on end, she would lie completely still with her eyes open. Meanwhile, my shoulders hurt; the day—like most Oregon days in winter—was cold and gray and, to top things off, I broke my glasses. 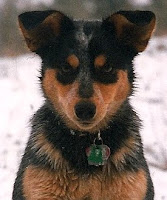 As usual, I had to drug myself to quiet the pain enough to go to sleep in my recliner last night with ice packs on both shoulders. Even then, I awakened several times to see if Bonnie was still alive and to offer her food and water. Today being Monday, I called her usual vet as soon as his office opened, and was told to bring her right over. She was looking a little better by then. With his fee, her medical bill is now at $1,900.

I’m frugal. I was raised by people who never took a dog or a cat to the vet no matter what. Then there is Bonnie’s advanced age and the fact that she’s blind. It hurts to spend the money, but I couldn’t forgive myself if I let her die without a fight. She wouldn’t let me die without a fight. But what is the limit of what I am willing to spend—$5,000, $10,000? I don’t know. I hope I never find out. 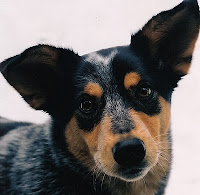 I look at pictures of how she was just a few short years ago. The second hardest thing about owning a dog is that they age so fast.

When Bonnie moved in, she weighed three pounds and, being a herd dog, she naturally assumed that she had been hired as the household CEO. Peggy was at a loss. She couldn’t bring herself to come down hard on Bonnie, so Bonnie ran all over her. I had no such problem. Our dominance struggle came to a head one night when Bonnie was six months old, and we were alone. When she took my supper off the TV tray with me sitting there looking at her, I shook my finger in her face, and she bit it—hard. Her eyes immediately got big because she realized that she had overextended. There commenced a chase through the house, which ended when I cornered her in the laundry room and slammed the door behind me. I flipped her onto her back, and lay on top of her screaming, “Goddamn you, you better never fucking bite me again you little Australian sack of shit!” She was so scared she wet herself. You probably won’t find captioned illustrations of this particular dog training technique in any book, but it worked wonderfully. True, she has bitten me since then, but it was always in some context that I could understand if not appreciate. For example, if we were roughhousing and I got carried away. That night was the last time I ever felt the need to scold Bonnie harshly. Since then, if I but raise my voice to her, she looks as if her world has collapsed.

Peggy and Bonnie eventually worked out their own relationship, but it took years. For awhile, Peggy would get exasperated and say, “Make Bonnie obey me,” but I ended that scheme pretty quickly because I didn’t want to undermine what little authority Peggy had.

I didn’t want to buy Bonnie, and we weren’t even looking for a dog when we got her, but Peggy saw her (in a pet shop window I’m ashamed to say since it probably means she came from a puppy mill), and felt that their souls were psychically bound. Coming from a decidedly non woo-woo Peggy, that was quite a statement. A few weeks later, I came home to find Peggy so angry she wanted to take Bonnie to the pound. Bonnie had gotten mad for no good reason that Peggy could see and had bitten her hard enough to draw blood. “Ha, ha, ha,” I asked, “whatever happened to your psychic bond? Ha, ha, ha.” Strangely enough, my show of compassion didn’t assuage Peggy’s anger, but time did—as I knew it would. Peggy is nothing if not loyal.

Now, today, Bonnie is on the floor beside me, and I don’t know if she will be alive this time tomorrow. I’ve lost dogs, and I’ve lost parents, but dogs are harder, partly because they’re so much like children, and partly because the relationship lacks all the emotional baggage.

Used to be that when something I loved died, I was just bummed over that one death. Now, when something I love dies, it’s as if all the deaths of everything I ever did and ever will love are encapsulated in that death. It’s one thing to know in theory that all things will die in some seemingly remote future, but quite another to understand to the core of my bones how much it will hurt when they do and how quickly that future will come. Only Peggy’s death could grieve me more than Bonnie’s.

One day, Bonnie discovered that she could carry her ball and her Frisbee at the same time by upturning her Frisbee and placing her ball in the hollow. What’s really uncanny about many dogs—Bonnie more than most—is how seemingly psychic they are. When Peggy and I go somewhere, Bonnie and Baxter (our schnauzer) always want to go too, but Bonnie knows long before we leave whether we’re taking them or not, whereas Baxter is clueless until we go out the gate. How do I know she knows? Because she sits in the corner, growls, and looks morose. Even now that she’s blind, she still figures it out in some way that I can’t imagine.

Two dogs died while Peggy and I were at the emergency veterinary hospital. I learned about their deaths from the wails of their humans. I have seldom witnessed men crying audibly in public. Peggy said the crying made things harder for her. I had the opposite response. Often, I get so lost in my grief that I feel as if I’m alone in hell while the rest of the world is going happily on its way. After all, as I move through my day, I rarely witness obvious misery. People—in offices and stores—look like they’re okay. Maybe the reason I was drawn to working in ambulances, hospitals, and funeral homes when I was a young man was because I wanted to witness grief as a way to come to terms with my own grief. I never have though.

When Bonnie dies, my world, as I know it, will end, and things will never be the same. I know this because I never get over any death of a loved one. The sorrow lessens, it is true, but all those sorrows together also accumulate, and my heart grows heavier with the years, and with the thought that Peggy—and I, but especially Peggy—only have two or three decades left. We celebrated our 38th anniversary on December 19, and if those years passed rapidly, how much more rapidly will our remaining time pass?