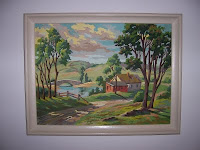 Continuing right along with my medical marijuana experimentation, I made some ganja butter by simmering leaves in butter overnight in a crock-pot. I had no idea how strong it would be, so I started with ¼ tsp straight-up—instead of in a recipe—and, when I felt nothing, I took ½ tsp three hours later. When I still felt nothing, I concluded that ganja butter must be as woosie as the tincture I had made. I decided that I was going to get some effect from it or die trying, so I started in again at noon the next day with ¾ tsp, and by midnight was up to 1½ tsp. I still had nothing to report when I went to bed at 2:00. At 2:50, I felt as if I had been catapulted into the air and was floating above the bed. “Uh oh,” I thought, “any trip that starts out this intense is going to be a bear."

I resolved, no matter what, not to awaken Peggy (who has her own room) because she had a migraine when she went to bed, and because she has a hard time dealing with anything that approximates mental illness. If I had been less experienced with marijuana, I would have panicked, but as it was, I mostly felt poisoned. I was so sick in body and spirit that I figured a hard death couldn’t be much worse, and then I became scared that I might have to go through the same thing all over again when I die. My heart was racing, sweat was pouring off me, and breathing and swallowing felt increasingly awkward. As I lay there watching the high wash over me in waves, I thought to distract myself by thinking about things I had to do, but, to my horror, it took me awhile to remember the basic facts of my life, things like who I was, where I lived, and the floor plan of my house. Yet, I could easily remember things that were bothering me. For instance, I recalled that three weeks have passed since I last visited a friend who is dying of cancer, and I brooded about the large dead tree that is threatening to fall upon my house, the one that my neighbor doesn’t want to cut. I also thought about a dinner invitation for the coming night that I felt sure I was going to have to cancel by humiliating myself with the truth about what I had done.

I thought I might feel better if I got out of bed, so I made my way unsteadily to the bathroom, where it occurred to me that I had better hurry back to bed while I still could. I took an Ambien on the way because I hoped it would help me sleep through the worst of the trip. I wondered if I should call someone for support, but I didn’t know a single soul whom I felt—at that moment—that I could awaken with such a problem, this despite the fact that I would feel honored to receive such a call. Besides, I doubted my ability to form words even if I were able to look up a number and dial a phone. I then thought about getting support by writing a blogpost and publishing it immediately, but I realized that I was too far-gone to write coherently. I could just see all of you finding a post that contained ten pages of, “3x4r-0u@vmpIO!UJ_jo7gn….”

I consoled myself with the thought that, as bad as things were, at least I wasn’t throwing up like I would be if I were really drunk. At that moment I realized that I was about to be at least as sick as I had ever been on alcohol. I tried to race off to the bathroom, but I couldn’t make my hands or feet work, so I rolled out of bed and puked on the floor. So much for not waking Peggy.

She was soon kneeling beside me, her frightened voice asking what I had taken and if I had fallen out of bed, but I was too far gone to speak (she figured out for herself what had happened). She brought me a trashcan, so as I lay in puke, I puked into it, so weak and uncoordinated that I couldn’t find my face with a washcloth or blow my nose with a Kleenex. I was drenched with sweat, so Peggy brought a fan, and we sat on the floor together hoping I could eventually get back into bed. With her help, I finally made it, but it was a difficult journey. In bed, I continued to puke as Peggy held the trashcan. When I at last appeared to be settling down, she said that her migraine was so bad that she simply had to go back to bed, but she didn’t reach the door before I was puking again.

Except for feeling weak and having a sore throat, I was better than fine the next day, so I did two things soon after I got out of bed. The first was to call my dying friend and arrange a visit. The second was to talk to my neighbor again about the tree. Both of these conversations went well, and I passed the day in a glow because of them and because I felt so proud of myself for having survived the night. Aside from people who end up in mental institutions, I had literally experienced the worst marijuana trip that I had ever heard of. I had survived it largely by reminding myself that I’m a mature person who has survived other bad trips, and so I would surely survive this one too.

You might find this incomprehensible, but I wouldn’t go back and do anything differently. Along with the pride I take in having held myself together psychologically, there is also—and I’m ashamed to admit this—something about the experience that draws me. I mean, have YOU ever had such a trip? Probably not, and you probably wouldn’t want to either, but given all the horror stories I’ve heard about ganja butter, I can see in retrospect that I invited it.

What I was seeking during those years when I took every hallucinogen that I could lay my hands on was an encounter with ultimate reality—at least inasmuch as it exists within myself as an integral part of the universe—because things look pretty bleak from my perspective. Take our species. We like to think we’re special, but the way I look at it, one—or even all—of us is of no more intrinsic value than a glob of snot, and the same could be said of our entire galaxy. That’s hard to accept, yet the evidence supports no other conclusion.

So, having no book, no god, no guru, or anyone else who I think has a clue more than I do about ultimate reality, there is no help for it but for me to turn within. Do I see much there? No, and if I had found drugs of any great benefit, I wouldn’t have given them up. Yet, they do offer something that I haven’t found elsewhere; they enable me to see myself more deeply than normal and from more angles than normal. On the one hand, marijuana, for example, goes a long way toward annihilating my left-brain intelligence (which is why math, language, spatial relationships, my sense of time and speed, and my planning and organizing ability wanes dramatically), but it also makes my right brain explode. Thoughts and associations come and go at lightning speed, and the power of some emotions is quadrupled while other emotions seem downright alien. I don’t say that there’s much in the way of concrete learning to be gained from drugs, but not all learning is concrete.

I just paused to think, and my eyes went to a paint-by-number piece (see photo) that was in my house when I was born. Maybe you have something from your childhood that has given you pure joy for all these many years. If so, you’ll know how much I love this painting, and you’ll probably agree with me that such objects bring us lessons that we can’t put into words. Likewise, you surely understand that when Peggy was holding that trashcan in the darkness despite the noise, the stench, and the fact that she had a migraine, she was teaching me something, not just about love, but about romance. One night like that tells me more about her and her love for me than all the Valentine’s cards in the world, but such knowledge can’t be put into words.

Peggy and I were walking Bonnie today when we passed another couple who, upon our approach, made their half-grown dog sit. “We’re having a teachable moment,” the woman explained. That about sums up life, I thought. We’ll soon lose all this learning that each of us has gained over a lifetime, and the universe will go on as if we never existed, but while we’re here, what else is there for us but to sit at the feet of the universe as reverently as that dog sat before its Mom and Dad, and to see what it is that we might lay up as knowledge that will carry us to—and through—the moment that we die?