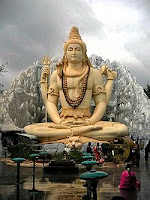 My yoga studio is four months old and is run by Jay, a former track coach from Colorado. He is forty, and his big muscles, shaved head, and in-your-face stare make him look more like a belligerent cop than a yoga instructor. Indeed, he took up yoga to deal with his aggression. Still, I trust him. I park my bike in his office, borrow his books, take his coffee grounds home for compost, have offered to help enlarge his studio, and play outrageous pranks on him.

For example, when I fell on my neck during a handstand that he encouraged me to try, I walked stiffly into class the next day with an ace bandage around my throat with (used) paint paddles poking out. While Jay freaked, I told him morosely that I had been unable to turn my head since class and had suffered a continuous nosebleed. He insisted that I see a doctor immediately. “Doctor?” I asked distractedly. “I don’t think I need one of those. I’m feeling a lot better with just vodka and codeine.” He never did get it, so I finally had to tell him that I was pulling his leg.

Jay pays other teachers to work in his studio, but he conducts most of the classes. The average class consists of one to four. This is good for me because I receive a lot of personalized attention, but no so good for him. He is hoping things will pick up now that summer is over, and I am hoping he can afford to wait.

I pay $60 a month for unlimited sessions, and go nine hours a week. I drop any and everything when it’s time for class because I see yoga as my best shot at strengthening my knee. Otherwise, I will have to forego my remodeling projects, and even housework is difficult when my arthritis is at its worst. After two months of yoga, I can do things that I would not have thought possible.
Before my knee problems, I never considered yoga. It doesn’t involve pumping iron, breathing hard, or sweating profusely: any of the things that I associate with getting in shape. Yet, I had the thought in class today that yoga is so demanding that it could be used as torture. All that would be necessary would be to put the victim into one of scores of postures, and make him stay there for ten minutes. My muscles often tremble before a count of ten, and a count of 100 would be impossible.

Yoga appeals to me for many reasons. It is artistic in a way that jogging, swimming, or lifting weights is not. It is also ancient (The Yoga Sutras are 4,000 years old but contain knowledge that was old even then). It can be done almost anywhere with no equipment. Finally, it develops strength, balance, flexibility, and spirituality, all at the same time. I am made to do hard things, but, paradoxically, the only way I can do them is to relax.

Jay gave me a t-shirt today on which is a triangle, the points of which represent mind, body, and spirit. A month ago, I was the only one in my Wicca class who took the position that straight lines are no less magical than curves. I argued that snowflakes, honeycombs, and basalt columns are objects of unparalleled beauty and mystery, yet all are angular. I also mentioned my love of triangles. To be presented with a representation of a triangle today touched me. I cannot say that it proves anything about the track I am on, yet I could not reasonably hope for a track that would serve me better—not that this keeps me from looking.

I am especially curious about Qigong and Tai Chi. The former is nearly as old as Yoga and is a part of Chinese medicine. The latter is less than 200 years old, and is both a soft martial art (the muscles remain relaxed) and a form of meditation and exercise. I am drawn to Qigong because of Tai Chi’s relative newness and its use as a martial art. I am drawn to Tai Chi because, unlike Yoga and Qigong, its movements flow from one into another, and this gives it a greater aesthetic appeal.
Posted by Snowbrush No comments: