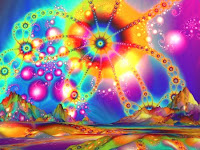 Now that I’ve been on marijuana for months, I have to ask myself how good it is for pain. I would say that for long term use, it’s as good or better as narcotics and sleeping pills and a lot less scary. However, nothing significantly reduces my pain; it just makes it easier to bear by either getting me high or knocking me out, and marijuana has the advantage of taking me far higher with far less risk than other drugs.

Now that I’m used to it, I can put away a fair amount of pot and still conduct normal activities, and when the high wears off, I don’t feel hung-over. For weeks now, I’ve been more or less high all day everyday (I start my mornings with marijuana and coffee), and the most notable differences are that I’m happier, and Peggy and I are getting along better. I’m not an easy person even in the best of times, and what I’ve been through over the last several years has been, up to this point in my life, the worst. Peggy and I haven’t had a fight since I started the pot. Marijuana makes me float through my days, my heart filled with peace and goodwill but also a high degree of compassionate candor.

Maybe marijuana should scare me more, but I’m not finding the science to prove that it’s that bad. The worse downside—and it’s truly annoying—is short-term memory loss. As for what this looks like, I’ll give some examples. (1) Unless I’m still doing it, I probably can’t tell you what I was doing five minutes ago. (2) More often than not, when I walk into a room, I have no idea why I’m there. (3) I will become so absorbed in a long and intricate train of thought that I’m barely aware of the world outside my head, that is until all memory of what I was thinking leaves me completely. (4) When I’m really high (late at night usually), I sometimes forget such essentials as my name and address, and I don’t just mean my street address, I mean the state I live in. Such experiences have helped me to understand what early dementia must be like. Yet, pot doesn’t turn me into an idiot; it simply suppresses my left-brain even while it makes my right brain explode with perceptions and insights. Marijuana, at its best, has the power to bring me face-to-face with pure being.

As annoying as it is, I can overcome the short-term memory loss enough to function fairly well even in business situations. I’m helped in this by the fact that I’m more interested in, and sympathetic toward, other people when I’m stoned than when I’m straight. I would even suggest that people like me better when I’m high, although I do tend to say more off-the-wall things more—the kind of things we all think but feel embarrassed to talk about.

I have no idea where I’m going with my marijuana experiment. On the one hand, I like pot a lot, it is grown for me at no charge by someone I love, and Peggy and I agree that we get along significantly better when I’m high, but on the other hand… Well, I’m not sure what’s on the other hand. It just seems a little odd to stay stoned all the time. Decades ago when I smoked pot, I never smoked more than a joint a day, and it was usually closer to two or three joints a week. Now, on any given day, I use more marijuana than I would have used in a month back then.

Do I still want to be using pot a few years down the road? I don’t know what I want to be doing a few years down the road. Sometimes, I don’t feel that I have enough years left to bother about. Time flies faster everyday, and I just sit here and watch it with a sense of wonder at how strange life is. To think that we exist here in this unimaginably small spot in the universe for an unimaginably finite fraction of time. Against this backdrop, what should any of us do? Just hangout and try to make our time here pleasant for everyone, I guess. Such an outlook would eliminate a lot of misbehavior if we all took it to heart, and that’s what I’m trying to do.
Posted by Snowbrush 29 comments: