A troubled man’s re-conversion and death 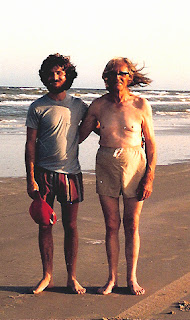 I’ve only known one person who had serious and prolonged doubts about religion who ever permanently returned to it, and that person was my father. He didn’t regain his religion because he finally found answers to the questions that had plagued him, but because his wife died and this left him alone, feeble, in failing health. His only help came from his daughter who found little time for him despite the fact that she lived in a house that he had built for her next to his own.

After his re-conversion, Dad and God conversed at length every night. God invariably monopolized the conversation, but Dad never complained. One of God’s messages was that Dad was about to win the Publisher’s Clearinghouse Sweepstakes, so he no longer needed his life savings. Dad told everyone at church that he had already won because in his mind, the fact that his number hadn’t actually been drawn was a technicality. His brothers and sisters in the Lord (Church of Christ people call one another brother and sister) were so delighted that they stopped treating him like a disheveled old eccentric who ranted during services, but like a beloved elder whom they were very glad to see. I called his preacher, and told him that my Dad had very little in the way of life savings, and that he hadn’t won a damn thing. The preacher suggested that I just wanted the money for myself.

A few months later, Dad left Mississippi and moved to Oregon to live with Peggy and me. Each morning over breakfast, he would stare at us through Ancient Mariner eyes as he conveyed God’s latest message. We comforted ourselves with the knowledge that he at least hadn’t brought his yard sign to Oregon, the one announcing that he was a “Prophet of God.” He did bring his habit of standing up in church and rebuking the congregation because, as God told him, they sinned by not using the King James Bible. The people in the two churches he attended here were as obstinate in their sins as the ones in Mississippi (living prophets are usually considered insane), so he eventually stayed home on Sundays.

His next brainstorm was to order business-size cards containing his name followed by the word “prophet,” our address, and the sentence, “Come see me if you need help.” He planned to give these cards to homeless mean and anyone else who looked down and out. Peggy and I stopped laughing about the hellfire sermons he was inflicting upon churches now that he represented a threat to our own lair. It was tough knowing that we simply had to impose our will upon this man who had been mentally ill since childhood and who valued independence above life itself. Indeed, Dad’s drive for independence was such that he would permanently balk if he even suspected that someone might be trying to persuade him to do something.

Peggy and I were the only people I ever knew who had an intuitive understanding of how to present a proposal to him in such a way that he wouldn’t lower his head like a bull and start building toward an explosion. On his worse days, a person needed tact to ask my father if he wanted a cup of coffee (“I don’t have to beg!”). On his best days, we could come right out and ask him to do almost anything as long as we made it clear that it would be a tremendous favor for which we would be eternally grateful. So it was that we picked a good day to ask him to cancel his card distribution program, and he agreed. We weren’t always so lucky, and there were two occasions on which one or the other of us simply had to say, “I’m sorry, Tom [Peggy called him Tom; I called him Dad], but such-and-such just isn’t going to happen.”

Peggy’s turn to confront him came when we told him that we were going to build a room for him at the other end of the house because we were a married couple and needed our privacy, Dad said he would go live under the bridge across the street if we didn’t want him with us anymore. Peggy responded, “I’m awfully sorry to hear that, Tom. We’ll really miss you, and if you ever want to move into the room we’re going to build, you’ll be welcome. Then, she asked if he would like to go shopping for furnishings for the new room, and he said he would. My father’s love for Peggy was one of the thing that touched me most about him.

My father said that his time with Peggy and me was the happiest of his life, yet he realized that his deteriorating condition posed a threat to his independence, and for this and other reasons, he decided to die by not taking his Lasix (a diuretic that he used for congestive heart failure). Other reasons that he wanted to stop his medicine were: he felt it beneath his dignity to take pills for a chronic ailment (“I’d rather be dead than to know that my life’s in that bottle,”); he believed God wanted him to go off his medicine as a test of faith, and would save him at the last minute; and he said that drug companies were greedy, and he had rather die, “…than to let the sons-of-bitches cheat me.”

I experimented with sneaking his pills into his food and found that I could get away with it indefinitely. I couldn’t justify it though. I had to think about the matter long and hard because I wanted to be sure that I was deciding on the basis of fairness and compassion rather than my desire to be free of the stress of being his caregiver. I talked the situation over with Peggy and several friends, and they validated my decision. That was important to me because my own feelings were so ambivalent. The crux of the matter was whether Dad was sane enough to make such a choice, but since he had always been insane, the distinction seemed less important than it would with someone who was acting out of character.

Nine days before his death, Dad apparently lost hope that God would save him because he said to me, “I want you to promise that you won’t let me suffer, even if you have to ease me out.” I promised, although I felt annoyed that he was willing to put me in possible legal jeopardy when he had already endured so much suffering without ever once thinking to ease himself out. I had grown up listening to this man threaten suicide so often that it got boring, and now he wanted me to kill him! Still, I considered it my duty. Death is no stranger to me, and I know I could euthanize someone. If you’re horrified by this, let me inform you that I’m no less horrified to live in a country that thinks it’s God’s will to let people suffer to any extreme, no matter how hopeless their condition.

Drowning over a period of days or weeks isn’t the worst possible death, but it’s plenty bad enough.  In fact, it’s so bad that my father needed many attempts before he was able to pull it off.  A day after he would stop his Lasix, he would look puffy, and his breathing would become labored. A few days after that, he would be too weak and uncoordinated to walk, and it would take him considerable effort just to lift a spoon to his mouth. His skin would turn the color of burgundy; and he would gasp for air like a fish out of water, his whole body swollen. He might stick it out for a week or more before he would go back to the Lasix. By the next day, he would be a new man.

The good part about dying of congestive heart failure is that when you’re pretty far gone, you fall into a coma. After that, you don’t appear to suffer, but the people who are sitting there listening to you drown on the green slime that bubbles continuously from your nose and mouth are doing plenty of suffering for you. Against his wishes, I saved my father the first time he came close enough to death to pass out, but after the cursing he gave the doctors, the nurses, and me when he awakened in the ER, I knew he was ready to die and that I was ready to let him. That was two years before the end, and as bad as those two years were, I’m proud that I didn’t ship him off to some waiting room for the grave like my sister wanted to do, and I’m proud that I married a woman who treated my father as lovingly as if he had been her own. Without Peggy, who knows what my father’s last years would have been like.
Posted by Snowbrush 34 comments: