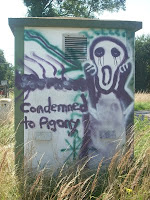 I called Mark’s office (Mark is my orthopedic surgeon) on Tuesday saying that my pain level was through the roof, and I needed to see him. His assistant called back and said that Mark didn’t think that would be necessary. I was seriously perturbed, but decided to give the pain another day or two before I insisted on coming in.

Peggy went out of town on Wednesday, which was just as well because I was awake nearly all night Wednesday night. I repeatedly lay down, but each time I did so, the pain drove me up again before I could get to sleep. Over a period of five hours, I took twice the prescribed dose of Dilaudid plus the maximum doses of oxycodone and Neurontin. I also drank some vodka, but I still couldn’t quiet the pain. It was a long night indeed, yet I wouldn’t say that it was an altogether bad night because, over the years, I have discovered within myself a fortress of serenity and optimism that the pain cannot penetrate. I don’t mean to brag, or to say that no amount of pain could reach it, yet I often stand amazed by my ability to remain upbeat against such a raw, unremitting, stabbing force.

I called Mark’s office Thursday morning, and was told that he could see me at 1:00. I worried about driving after taking so many drugs, so I asked Bella (at 87, she’s the oldest member of my atheist group) to chauffeur me. Mark checked me over pretty good, and then said that my excessive pain was probably caused by two things. One was overdoing my new exercises last week, and the other was the fact that narcotics simply don’t work for me anymore.

“You’re saying what I hoped you would say,” I offered (I had been afraid he would have to redo the surgery), and then I told him about all the drugs I had taken the previous night. Before I could finish, Bella chimed in, “Tell the doctor about the vodka. He’s not supposed to wash his narcotics down with vodka, is he doctor?” “Oh, my god,” I thought, “I’ve found myself a Jewish mother, and I’m not even Jewish.” (I think Bella was disappointed that Mark didn’t give me a hard time about the vodka or about piling on the narcotics.)

As we were leaving the office, Bella twice observed, “He’s really good looking, isn’t he?” Well, the truth is that I almost didn’t go to Mark because in his picture, he looked like what he is, a jock. Yet, I get along with him about as well as any doctor I’ve ever had. Two hours after I got home, Bella emailed me a list containing everything Mark had suggested. My new Jewish mother is just too cute.
Posted by Snowbrush 28 comments: