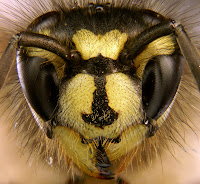 Isabella moved in a few days ago. I took her back out, but it was so cold that I couldn’t bring myself to leave her, so I brought her in again and gave her some fruit. She was quite hungry. She disappears everyday only to turn up again in some unexpected place at night. I let her crawl around on my hand while I watch TV, and then I put her to bed on her fruit plate. I placed an upside-down bowl partway on top of the plate, so Isabella could sleep in the dark, but she prefers to sleep on top of the bowl.

I have a hornets’ nest hanging in the den, and Peggy worried that Isabella was but a precursor to hordes that were about to hatch out, but I assured her that there is no mistaking a yellow jacket for a bald-face hornet, and this made her feel some better, but she still won't cuddle up with Isabella.

Oregon doesn’t have nearly as many kinds of wasps as Mississippi did, and I miss them. One night in 1977 when I was building our house down there, I was smoking pot while painting the upper portion of a vaulted ceiling. A few dozen large red wasps were flying aimlessly in the vicinity of a light that was on the wall above the second floor balcony. They had come indoors that day, had been unable to find their way out, so were now awake hours past their bedtime with no hope of going home again. I was atop a sixteen-foot ladder, a bucket of paint in one hand and a brush in the other, and I was moving ever closer to these wasps.

In my altered condition, I believed I was able to tune into their mental state, and that we were on the same wavelength, this despite their increasing agitation each time I moved in their direction. I kept advancing anyway, certain that their anxiety was not prompted by me but by the smell of paint in the hot, humid air. When I got within five feet of them, they began feinting dives at my head, and otherwise making it clear that they were about to nail me. I finally descended in the belief that my connection with them might not have been imaginary—after all, they had shown more patience than I had a right to expect.

When my father and I painted houses together, he would destroy red wasp nests by dousing them with gasoline. The moment it touched them, the wasps would fall straight to the ground by the hundreds. Then, he would knock the nest down. The rest of the day, the ones who hadn’t been on the nest would fly around aimlessly, but without a family to defend, they seldom stung.

I built a home for solitary wasps, and every year I have a few small nests of yellow wasps in my toolshed. I used to remove these nests, but most years, I would forget to look up to see that they were there until the summer was half over. After a few years of brushing my head against them without ever once being stung, I left them in peace. I think of wasps in the same way that I think of a lot of other creatures that have the power to hurt or even kill me, but don’t go around looking for an excuse to do so. All that they ask of me is that I respect their boundaries. 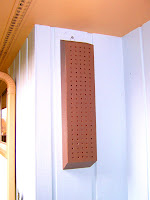 Unfortunately, this is hard to do with aggressive wasps that I don’t even see—like yellow jackets that live in the ground. There have been years when Peggy and I and both dogs were stung many times because we walked over their holes while hiking. I’ve even seen Peggy stand on top of a hole brushing yellow jackets out of Baxter’s fur while more were pouring out at them. She’s a funny girl when her maternal instincts go into overdrive.

I’ve thought a lot about what is right for Isabella. Her family is dead, and she has no real home and no work to do, so it might be better if I left her to die in the cold. Whether it’s a plant, a dog, or a wasp, once I take something in, I feel morally obligated to care for it, yet I don’t always know what is best.

Night before last, Baxter started moaning and shivering as he struggled to breathe. I have many drugs that might relieve his distress, but which might also kill him. I tried to talk the matter over with Peggy, but she didn’t have much to say, and I concluded that this was one of those situations that she wanted me to handle. I was about to give him a few grains of a Percocet when I remembered that I had a tranquilizer that we give to Bonnie anytime there are fireworks, so I gave a quarter tablet of it to Baxter. That should have been a low dose, but it knocked Baxter on his ass. In fact, I thought I had killed him, and I cried off and on for the next six hours while I waited for him to die. He looked so little and so pitiful that I didn’t know how I could bear it. Every time I thought I had pulled myself together, I would cry some more. 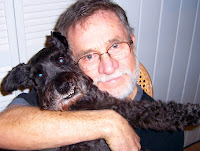 At one point, I tried to rouse him by standing him up, but his every leg splayed out in a different direction. Six hours later, I woke him up enough to pee, but as he was standing in the yard struggling to stay on his feet, Bonnie—who is blind—knocked him over. I couldn’t help but laugh at my two elderly dogs, but five minutes later, I was crying again. Now that I’m getting old and have seen a lot of death, you might think I would handle these things better, but the truth is that death seems even heavier to me now than it did when I was young.

The next day, Baxter was alert and active only to sink again last night. This time, I gave him an eighth of a tranquilizer, and that amount seemed just about right. Peggy suggested that we call the vet to be sure the pills are safe for him, but I told her that I didn’t see any need for that since he’s dying anyway. My only goal is to keep him comfortable. When I can no longer do that, I would prefer to euthanize him myself, but Peggy is determined that the vet do it.
Posted by Snowbrush 23 comments: