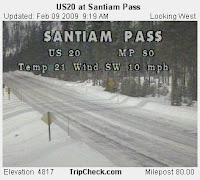 Peggy and Walt slid off an icy highway Saturday and totaled his 4-Runner. It was their third ski-related accident, and Walt was driving each time (Peggy wouldn’t drive in mountainous wintry conditions even if we had a vehicle that was capable of it). No one has ever been seriously hurt, although I have lost all faith in Walt’s driving and would prefer that Peggy not ride with him. She feels differently, almost as if she regards the occasional wreck as part of the skiing experience. I could forbid her going with him, and leave it to her whether to accede to my order, but I am not disposed to giving orders even if I had the power to enforce them. I even thought about telling her to call someone else for help next time, but that was only because I was in a pissy mood.

Peggy’s passion for skiing brings only worry into my life, but I have rarely if ever forbade her to do something. I worried about her climbing mountains; I worried about her traveling around Europe; I worried about her ice-skating; but I worry most of all about her skiing. Even so, I realize that it’s no use trying to clip someone’s wings. Back when I was chasing women, Peggy put her foot down, but the compulsion was too strong. Likewise when I was experimenting with psychedelics. Now that I am over all that, I am glad she hung around.

Some indignant reader might well ask, "How the hell is her going skiing comparable to you going womanizing?" Well, dear reader, given the tone of your query, I doubt that any answer of mine will be considered adequate. Nonetheless, the comparison is that they are things that we each feel, or felt, that we truly needed to do. Yes, both are risky, and mine transgressed moral boundaries; but they still represented parts of ourselves that we felt we couldn’t say no to. Certainly, all paths are not good, and all paths are not equal, but sometimes a person has to travel a path in order to learn these things. This is why I cannot bring myself to say, 'I forbid you.'"
Posted by Snowbrush 2 comments: