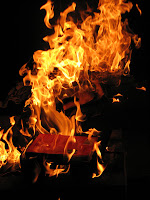 Doyd was 92. Whenever I phoned, his wife would answer and tell him it was me. “Hello, my friend,” he would say as my heart leaped for joy. Well, that’s over. Never again.

I would hate funerals anyway, but I hate them a lot more when they’re religious funerals, and Doyd’s was about as religious as they get. Did the pastor actually believe that all of Doyd’s friends were conservative Christians, or did he just not care? Was that why he opened the service by saying, “We are gathered to proclaim Christ crucified…” [Silly me, I thought we were “gathered” to bury Doyd.] And is that why everyone was instructed to recite the Lord’s prayer, and the Apostles’ Creed, and to make other Christian professions of belief? It’s one thing for someone like myself to have to remain silent through an occasional avowal of faith, but I had to remain silent through the entire service because there was literally nothing that I could repeat in good conscience.

I think that being an atheist is like being deaf in that people don’t make a point of excluding you, but you are excluded just the same. In America, I am excluded every time the Pledge of Allegiance is recited, or “God Bless America” is sung, or prayers are said at otherwise secular events, or my fellow jurors take an oath with one hand upon a Bible, or I am taxed to support religious groups, or I am forced to use currency that contains a statement of religious belief. At every turn, I am expected to either participate in religious ritual, or to remain respectfully silent during religious ritual.

To better understand how this feels, imagine that all of this worship was directed at Allah. How would YOU (I’m assuming that I have no Moslem readers) feel about saying “One Nation Under Allah,” as part of the Pledge of Allegiance, or watching your president take the oath of office on a Koran? How would you feel if your money contained the words “In Allah We Trust,” or your tax dollars went to Moslem clergymen and Moslem charities? When you attended a city council meeting and was instructed to kneel toward Mecca, would you be okay with that, and would you instruct those who complained that they should “live and let live,” which is how some of you have instructed me?

There is no cow more sacred in this culture than a respect for religion, yet there is no corresponding obligation on the part of the religious to respect those of us who hold opposing views. And, to tell you the truth, I think this whole thing about respecting one another’s religion is just so much politically correct hypocrisy anyway because each of them thinks that they’re at least a shade closer to god than the rest, and even this is only true for the ones who don’t think the rest are going to hell in a hand-basket.

This situation in Florida where a preacher is planning to burn Korans on September 11. No matter what you think about whether that’s a good idea, tell me this. Do you respect Islam? Government officials are forever assuring us that Islam is a “religion of peace,” yet every time I turn around, Moslems all over the world are doing the same thing that Christians all over the world used to do (and will probably do again someday), which is to say that they resort to intimidation and murder when they don’t get their way. Truly, there is no complaint too trivial to inspire them to violence, and I don’t just mean one or two nutcases—I mean millions of nutcases.

Indeed, it is precisely because Islam is anything but a religion of peace that the U.S. government is putting so much pressure on that preacher to call off his book burning. For my part, I hope he goes through with it. Let’s put the cards on the table. Let’s show everyone who is naïve enough to maintain any illusion about the peacefulness of Islam exactly what happens when a citizen of the United States exercises his Constitutional right to burn any book he pleases. I would just like to see him throw in a few Bibles and top the pile off with an American flag and assorted other symbols of tyranny. If god doesn’t like it, then how about letting god stand up for himself for a change? He has been allowing his representatives on earth to murder one another to no avail for thousands of years, so how about we all step aside and give him a chance to get off his duff, and, well, if he can’t get off his duff, then, just maybe, he has no duff. Just maybe, he’s not even real.
Posted by Snowbrush 19 comments: