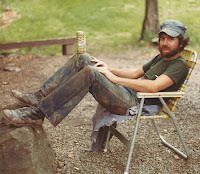 When I started college in 1967, my new friends were light drinkers, so I became a light drinker. When I transferred to another school three years later, this situation continued, not because I had grown in virtue but because I wasn’t ready to make my own decisions based upon my own values. I’m not even sure I had values, although I was certainly overwhelmed by feelings that pointed in the direction of values. For example, I felt that the universe had special plans for me, and that they would be realized without any great effort on my part. I also felt that everything I had ever heard about God was a lie, including his existence. You will note that the first feeling necessitated belief in an extremely powerful entity that controlled my destiny, whereas the second feeling denied the existence of that same entity. So have I ever lived, unable to go in one direction but equally unable to go in another.

A month after I finished college, I began to feel tired and feverish, and dropped from 165 pounds to 130. My doctor concluded that the problem was imaginary, and since I believed that doctors were geniuses, I kept going back to him for another try at being taken seriously. When I finally turned yellow, I was thrilled because I figured that this would get his attention, and it did. I probably had hepatitis, and I probably got it from a girl, but liver testing was still primitive, so I can’t say for sure. In any event, I got well while lying around the hospital awaiting a diagnosis. Maybe I needed the rest. My illness had forced me to quit my first teaching job; I had no prospects and no place to live (I was still in the dorm); and I was getting married in three months to Peggy whom I had met two months earlier.

After my illness, I got drunk so infrequently and my hangovers were so horrific that I probably remember every occasion. On one of them, I drove my father for a visit with my sister and her cotton-ginner husband near Tallulah, Louisiana, some hundred miles distant. We three men took a one-night camping trip upon which we mostly drank. When the two of them went back to drinking the next morning, I told my father that I either needed to sober up, or we needed to plan on spending the night at my sister’s. He said we could stay, but when nighttime came, he wanted to go home. I reminded him of his agreement, and he said that, by god, if I wasn’t man enough to drive, he was. When I objected, he set out walking—or at least it looked a little like walking. While my sister and brother-in-law went to fetch him, I prepared as best I could for our drive across the battlefields of the Old South.

My last drunk occurred in the early eighties when Peggy and I stopped off somewhere on our way to an overnighter with Peggy’s teetotaling parents some fifty miles distant. My first trick was to stagger into their house and vomit on their bed—the evening went downhill from there. Doris and Earl no doubt rued the day that their daughter met me, but as my mother used to say about my sister's husband, “Well, at least he doesn’t beat her.”

That night was the end of my heavy drinking, not because I was overcome with shame—which I wasn’t—but because I couldn’t handle the hangovers anymore. I’ve rarely had more than three drinks at a time in the decades since then, and seldom that many. As I write, I have wine, beer, and even some 190 proof (leftover from a marijuana tincture) in the pantry, but I long ago lost most of my interest in the effects of liquor. I don't miss it.
Posted by Snowbrush 24 comments: