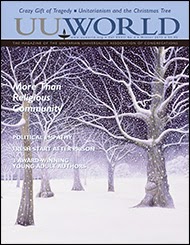 “No matter how difficult our circumstances or how dire our situation, we need a way to pull everything together and celebrate wholeness. We need to affirm what is true, cherish what is beautiful, and embrace what is lovely. The necessity of religion emerges from this deep-seated and longstanding human need for wholeness.”*

Upon reading it, I reflected that most if not all of the atheists I’ve known would argue that I don’t need religion for these things, but I’m afraid I do. Yet, I too am an atheist so why, then, religion? Because I’m still idealistic enough to believe that, at its best, religion has the potential to contain in one place a mixture of worship, philosophy, morality, mystery, compassion, openness, music, art, history, and community. But why Christianity? Because it’s what I have to work with, both by virtue of my culture and my history.

I’m a Christian in the same way that I’m a Mississippian. I lived in that state for 37 years, and in Oregon for all but two of the past 28 years. I left Mississippi because I hated so much about it, yet it is ever with me. I miss its water oaks and Spanish moss; the flatness of its Delta; its Indian mounds, battlefields, antebellum mansions, and Natchez Trace; the heavy fragrance of its warm humid nights; the constant reminders of its Civil Rights era; and scores of other things. When I’m especially low, I envy my friend Lee, who left Indiana and never looked back. I likewise envy my wife, Peggy, who left God and religion and never looked back. I not only look back; I can’t separate myself from these things. They make me the person I am, possibly as much or more than if I had never left them, and I find it as pointless for my fellow atheists to argue against the literal truth of God or Christianity as to argue against the literal truth of anything that matters deeply to me. Besides, I know all their arguments.

If you want to understand something, be completely absorbed by it, think of it from a thousand different angles, throw everything you have into reaching a state of peace and wisdom regarding it; then love it even while being tortured by it, knowing that the times it will hurt you the most are when you’re the most vulnerable, which are also the times it will delight you the most. I wouldn't wish to mold myself into someone else because I know who I am and what I’m about. Others might look at me and think I need some serious alterations, but just as they pity me, I don’t envy them because my struggle is also my reward. I apparently communicate this poorly because, much to my horror, it’s obvious that many people do pity me, and since I relate pity to condescension, I hate being on the receiving end of it.

Too many people imagine that a good life is one in which pressing problems have been resolved. I can’t say but what they’re right because I’ve never experienced such a life, but when I think of one, I picture prisoners who are kept in their cells for 23-hours a day and only allowed out to exercise in what amounts to a dog-run. They’re fed without working and don’t even have to wash the dishes. Their laundry is done for them, and they need never worry about getting behind in their work, or being laid-off, or having an accident, or finding enough money to pay for surgery, because their lives are completely secure in regard to the kinds of problems that the rest of us face every day. Yet, who wouldn’t rather be dead than to live in such security?

This post was mostly inspired by those readers who, for years, have repeatedly asked: Why would an atheist write about religion so much? and Why would an atheist go to church? To what I just wrote, I would add the following: I enjoy holy water, ritual and incense. I delight in stained glass. I like reading about religion. I like discussing religion. I enjoy religious art, poetry, music, and history. I enjoy being a part of a community that struggles with issues of morality (which is something the Episcopal Church does in spades). I enjoy having at least the hope of a sense of community that is otherwise lacking in my life, and I enjoy knowing that this community will outlast me because I’ve been a part of so many communities that failed. I enjoy trying to work out old hurts in a new way, a way that is right-brain rather than left-brain. I enjoy taking risks. I enjoy exploring internal frontiers. I enjoy experiencing new things. I enjoy meeting thoughtful people. I enjoy being reminded that not all religious groups are intent on dominating society’s schools, morals, and politics. Despite my atheism, I enjoy the experience of reverence and worship.

I have no illusions that what I’ve written will satisfy my questioners because: (1) As their context usually indicates, umbrella questions that challenge my motivations by asking why? suggest that the questioner regards my behavior as so extraordinary as to warrant disapproval if I am unable to offer an adequate explanation, something that I am rarely, if ever, able to do to their satisfaction. (2) Almost invariably—if not invariably—my past explanations were met with complete silence, and I took this to imply that they were likewise met with disappointment, an interpretation that was reinforced when the same readers asked the same questions repeatedly. (3) I can’t even defend my preference for chocolate over vanilla, so how am I to defend myself in matters that are interpreted as indicative of a deficiency in character or stability? I wish I could, but I know that my efforts are doomed in the eyes of others, and so it is, as it has ever been, that I write primarily for my own benefit. Although these two questions have encouraged me to think, I've come to wish they were a bit more varied because, after years of answering them to the best of my ability, I've run out of things to say. It's now a case of either accepting my answers or not.

*by Galen Guengerich in an article entitled “The necessity of religion,” UU World, Winter 2013
Posted by Snowbrush 16 comments: