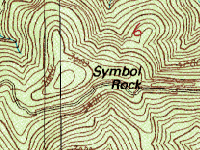 Peggy and I hiked up 4,081-foot HeHe Mountain (an Indian word for “home of good spirits”) this weekend and might have scrambled up Symbol Rock (used by the Indians for ceremonial vigils) as well if my knee were better. Peggy did climb a short distance, but pronounced the stones too loose and the moss too slippery. From the safety of the bottom, I felt sure I could find a better route, but resisted the temptation. This was harder than it sounds because, even before I got home and looked up the Indian history, I had all but convinced myself that Symbol Rock had the power to heal my knee. It soars hundreds of feet in curved, six-sided columns, and could scarcely be more impressive if it was the throne of God.

After driving several snowless miles at the 3,500-foot elevation on our way to HeHe, we thought we might be able to return home by a different road, but were stopped at 3,000 feet by snow that was deeper than our bumper and stretched as far as we could see. We have often observed snow depth anomalies that defy explanation in terms of slope, drift, exposure, or available sunlight, suggesting that some areas simply get heavier snow than do other areas in the same vicinity.

At 1,500 feet, numerous plants that had been leafless where we had just been were laden with flowers and/or greenery, while other plants that had not existed at all were likewise leafed and flowered. Dogwoods bloomed overhead while coltsfoot, violets, trillium, monkey flowers, manzanita, skunk cabbage, and wood sorrel colored the ground below.

The woods are so wondrous as to seem like a dream. As always, we picked up other people’s beer cans and shotgun shells, but even these looked as if they had been touched by magic just from over-wintering in the forest. Nature might exist everywhere, but is harder to appreciate where it has been paved over.
Posted by Snowbrush No comments: