Under the nice surgeon's knife and out again 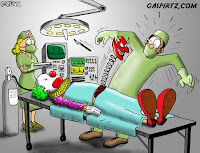 My two-hour surgery started yesterday morning at 8:00. The nerve block wore off last night at 1:00, so I took a sleeping pill and two Percocets. When they didn’t help, I had no choice but to wait four hours before moving up to Demerol, but even with Demerol, the pain forced me from my chair every 45 minutes. Once up, I would stumble about the house for a while, catch up on a blog or two, and change out my ice pack. As crappy as the night was, the pain was physical rather than emotional, and physical pain is nearly always easier to bear. Indeed, I’ve grown so accustomed to it that I’m confident in my strength to endure it, plus I see no place to go but up, the pain being so outrageously bad that it’s darkly funny.

Speaking of things that are darkly funny, I had a good late night chuckle when I damn near tripped over my blind dog and crashed through the living room window, which measures four feet by seven feet. Such a dramatic exit from a warm house onto a cold sidewalk would have capped the day off nicely, I thought. One thing about the universe is that no matter how much crap it throws at you, there’s still plenty in reserve.

Despite the pain, I’m high on the fact that my surgery has become an event of history rather than a source of dread. I fully expect months of misery, but I can almost make out a light at the end of the tunnel, and that feels really good.
Posted by Snowbrush 34 comments: