"The many men so beautiful! And they all dead did lie: And a thousand thousand slimy things lived on; and so did I." 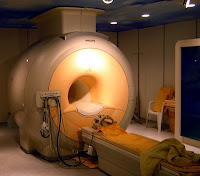 I saw the doctor Tuesday—39 days after surgery on my right shoulder—and he said the pain I’m having could be caused by a couple of things, either of which will require a second surgery on my right shoulder before I have surgery on my left shoulder. He ordered an MRI, which I had yesterday. People get MRIs and CT scans mixed up, but the difference is that the first kind of image is made with magnets and the second with radiation. For an MRI, you lie on a little trolley and are rolled into a long, narrow, and extremely noisy tube. I can best liken the noise to a whole lot of people rhythmically banging pieces of scrap iron together in a junkyard.

Yesterday, I knew that it would hurt a lot to lie on my back for a half hour with my shoulder in something resembling a vice, so I took two Norcos (the narcotic equivalent of three Vicodin). When the technician first positioned me, I couldn’t even begin the handle the pain, so he spent several minutes cushioning my shoulder. Peggy had helped me change clothes for the procedure, and the tech gave her a magazine and told her she could sit in the MRI room with me.

I knew that if I moved, I would have to stay in the machine even longer, and that if I moved too much, I would have to come back again, yet I despaired of holding out. I tried to count each four-minute series so I would have an idea how many more I had to endure, but I lost count. Then, I tried to relive memories of happy events in my life because I had heard that some prisoners of war survive torture that way, but I couldn’t come up with many memories or hold onto the few I did. I even tried counting the seconds, both as a way to distract myself from the pain and to know how much longer each series would last. One-one thousand, two one-thousand, three one-thousand and so on. But I had no idea how closely my counting coincided with the passage of time. I suspected that I was way slow.

The technician could talk to me over a microphone, and he started telling me that I needed to lie still. I thought I was lying still, but I tried even harder. My arm stopped obeying me any too well, and I was afraid I would lose control of it completely. Meanwhile, the roof of the tube hovered three inches above my face, and the metallic pounding of the machine blocked out the classical music in my headphones. I didn’t scream, cry, vomit, faint, or thrash about; so to Peggy, who was unable to see anything but my feet sticking out of the tube, I must have looked okay.

I thought of the months of torture that people were subjected to at Guantanamo Bay Prison, and I wondered what kind of lame-ass torturers needed months, rather than minutes, to break a man.

I remembered being told in church when I was a kid that hell was infinitely painful and lasted forever, but that the loved ones of people who were in hell were still able to experience unlimited happiness in heaven even though they knew what was going on down below.

I didn’t think I could bear it if the pain got worse, but I also knew that I could tell the technician to stop. This made me wonder about people who are in even worse pain, and for a much longer time, but can’t stop it. I’ve heard that they pass out, but what happens when they wake up and the pain is still there?

Years ago, I saw a documentary about Devil’s Island, the place where the French used to send criminals. In that documentary, a man was on his back, being manacled to a wooden bench for the night. He was in obvious pain, sobbing and pleading with the guard, for what I didn’t know; maybe to make the manacles looser. He was a little man, and he looked so pathetic that the image has stayed with me for years, although he was only on the screen for seconds. I think of him a lot when I’m hurting, because he had no drugs, and his guards had no mercy.

Another thing that went through my mind yesterday was that I couldn’t imagine anyone not killing themselves if such pain was all that lay ahead of them. I should think that even people who believe that God sends you to hell if you kill yourself would still kill themselves and take their chances. I should think they would even beg for a gun.

Later, I tried to tell Peggy how bad it had been, but words failed me, and I worried that she would think I was a wimp. Pain is a very private world. Sometimes, I feel like I’m no longer in this world (at least this world as I’ve known it), but have stepped into some other world.

Sometimes, I write about how bad things are for me, but what I don’t write about is how much I respect myself for how well I am handling it. Part of what keeps me going is that I have settled my mind on the idea that I am facing a year of pain and disability, but that, if I can hold out, I should be in good shape this time next year. If I’m not, I’ll deal with it then. For now, I need to believe that things will get better.

Some of the people who read my blog have cancers that will probably kill them. Another woman, Cali, has a disease that’s six words long, but which means that the nerves all over her body are screwed up, and that she is in permanent pain, and might get worse. Others are in pain from bad backs, rheumatoid arthritis, and so forth. These people hold me in their hearts with compassion. Maybe it’s true of people who suffer a lot that they are more loving toward those who are suffering less, than are people who haven’t known much suffering. Sometimes, such people tell me that I speak for them when I write about pain, not because I hurt as much, but because I describe it better. Still, I doubt that many of us feel understood by those who are closet to us. It’s like war in that you have to go there to have a clue.

I tend to think in terms of how bad things would have to be before I killed myself. I have already endured a lot, and this makes me think that I’m a lot stronger than I gave myself credit for. I have been depressed for much of my life, but for the most part now, I am not particularly depressed. I think this is because I regard my condition as so frightening that I don’t have the luxury of indulging myself in too much negativity. I get negative, of course, but I bounce back faster than I did when I was emotionally depressed but physically healthy.

I’m sure there are those who think what I might have once thought, that I’m making a mountain out of a molehill. After all, my main complaint is shoulder pain, and how bad could that be? Everyone has had sore shoulders, so when they try to imagine how I feel, they probably picture it as simply a bad case of sore shoulders. Peggy sometimes expresses the wish that she might feel my pain for a short time in order to know what it is like. I wish she could too, because even a few minutes of it would give her some idea.

Something else that comforts me is my knowledge that, throughout the millennia, most people who have suffered as I suffer had no hope for anything but more pain. And what of those who, despite the pain, had to work hard physically to survive? I have no idea how they could bear it, but knowing even a little of what their lives were like makes me better able to face my life, that and the fact that I have a doctor whom I like and trust.

Mark is big. Maybe in his upper thirties. A serious bodybuilder. Strong but gentle. He takes his time with me. He listens. I went through three other doctors to find him, and I would not be coping nearly so well without him—or his assistant, Laura, who is so prompt to call back when I need something.

What I would really like would be to compartmentalize my suffering so that I could still have a more or less normal life, but I’ve found this to be exceedingly difficult because I can’t do so most of the things I would normally do. It’s like my life is on hold, and getting beyond that is a struggle against which I’m not making much progress.
Posted by Snowbrush 32 comments: