What if you had to take a written exam to get into heaven? 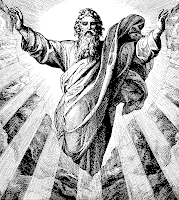 You might be aware of the recent Pew Forum's U.S. Religious Knowledge Survey on which atheists beat out Christians (I scored 100). Last week, I laughed until I cried listening to representatives from various denominations explain on National Public Radio why the test was unfair and the results were irrelevant anyway.

I mean, come on guys, if you're an American Christian, you have the good fortune to live in the most religious of First World nations BY FAR, yet atheists know more about religion than YOU do! ATHEISTS!!! I mean, aren't you just a little embarrassed? If you are, good for you. At least you're more humble--or, perhaps, just more honest--than the experts on the radio. I can't prove it, of course, but I would bet you anything that if the atheists had flunked, those same experts would be saying, "See there. The reason atheists don't believe in God is that they don't know enough about religion."

"But were the differences significant," you might ask. YES! Atheists barely edged out Jews, and Jews barely edged out Mormons, but other Christians might as well have been riding hobbyhorses in the Tour de France. The poor Catholics were clueless about the role of the bread and wine in the mass, and Protestants were fuzzy on the identity of an old-timer named Martin Luther. Arrrgh! All I can say is LOL.

I remain sincerely yours,
An Insufferably Smart-Alecky Atheist