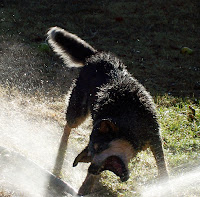 I’ve yet to cry over Bonnie. Maybe the Cymbalta is in the way, or maybe it’s because I’m so relieved to have the stress behind me. I look at her grave, and am stricken that never for all eternity will I see her again, yet the tears won’t come. When she was young, she thought she was invincible. For example, she was lying on the car seat one day when a city bus pulled up beside us, and the sound so infuriated her that she tried to jump out the window and attack the bus (luckily, the window wasn’t open all the way). Her self-confidence was such that she almost had Peggy and me believing that she was the goddess she considered herself to be. Old age, arthritis, and blindness debased her, and she became as timid as she had been arrogant. The joy that had once filled her being died long before she did, and it was very, very hard to see it happen. I would watch her running into walls as she fled a cat that wasn’t even chasing her, and I would think, How low the mighty has fallen. How then am I supposed to grieve? What then am I supposed to grieve, the death of dog whose spirt died three years before she did? If I grieve anything, it’s not her death, but the three years before she died and my inability to be there for her in the way she deserved.
Posted by Snowbrush 24 comments: