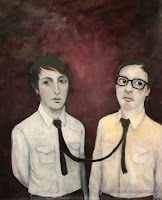 Until I was ten, my family lived in the country, and I substituted TV characters for playmates. My favorite program was The Huckleberry Hound Show, and I cried each afternoon when it went off.

I made friends readily when we moved into town, and I didn’t feel lonely again until I was in my mid-twenties. During the years when I had a satisfying number of friends, they and I visited one another frequently and without notice. I still miss that, but even at the time, I thought that some people carried it a bit far.

My high school friends and I came from low middle-class families and were under-achieving outsiders. I loathed wealthy, high-achieving insiders because they were snobs, yet I longed for them to like me. I have never gotten over my hatred.

After college, I discovered that people often lose friends to marriage. I can think of various reasons for this: (1) Your friend’s spouse will sometimes hate you—or you her; (2) Even if your friend’s spouse likes you, she will have first dibs on his time; (3) Jobs and children deprive people of leisure and spontaneity; (4) Our interests—and hence our friends—change as we age.

As I progressed through my twenties, I became increasingly lonely. I still had a few male friends, but I wanted more depth than I was getting, so I often felt bored and disappointed. I began having affairs, and these relationships were characterized by excitement, intimate conversations, and boosts to my ego. I therefore lost much of my interest in my male friends. As the years passed, I came to miss them, but not the women. Unfortunately, most of them are dead.

I tried to cure my friendship deficit in various ways. One thing I did was to get a pilot’s license because I didn’t want to move away from my house and land in Mississippi, and I thought that my social options would expand if I could fly. The problem was that my little Cessna was slow and easily grounded by bad weather.

I then decided that I wanted more than just friendship; I wanted people to share my life with, so I decided that I would like to live in a commune. I spent most of two years visiting such places all over the country. I wanted Peggy to go with me, but she wasn’t willing to give up the security of a job, so I went alone, and had her fly out whenever I found a place I thought she would like. Our desires were so different though that the place I liked most (an intensely personal international commune in NYC) was the place she hated most.

Then I found out about a new social movement called “polyfidelity,” which was defined as an egalitarian group marriage. Right away, I knew it was for me. Peggy wasn’t so keen on it, but she wasn’t closed to the idea either. The headquarters of the movement was in Eugene, so that’s the main reason we moved to Oregon. Within a week, I had more friends in Oregon than in Mississippi.

Peggy and I eventually became involved in a polyfidelitous relationship with a woman named Vicki who was a doctoral student in Minneapolis. We lived there for two years until that relationship failed. During my time in Minneapolis, I continued to have a satisfying number of friends. However, I was ecstatic to move back to Eugene where, again, both friendships and affairs flourished.

I soon founded a group called Family of Choice Network (FCN) that quickly grew to fifty members and sponsored two support groups and frequent social events. What I discovered about this group (and others since) was that I had no problem with finding enthusiastic supporters as long as they weren’t expected to do any of the actual work.

In the late ‘90s, things on the friendship front began to fall apart due to the demise of FCN and of the polyfidelity group that had brought us to Oregon. I also had a serious falling-out with my best friend, Walt, and, worst of all, I became involved in a peer counseling organization known as Re-Evaluation Co-Counseling (RC). I threw myself into the intensity of RC whole-heartedly, and became the darling of many people in the female dominated community.

Unfortunately I committed the cardinal RC sin of becoming romantically involved with two of my co-counselors, one of whom was an RC leader. When these relationships fell apart, I experienced severe anger, which I had imagined I could work through with the help of other co-counselors. Instead, I found myself shunned, and I became thoroughly disillusioned with RC and with people in general. During the seventeen years since RC, I’ve only had two affairs and one close friendship—all of but one of which ended badly. Nothing remains of my former idealism regarding the possibilities for human intimacy.

By contrast with my own friendships, Peggy’s friendships are characterized by an absence of drama and intensity, and whereas she never loses old friends, she sometimes gains new ones.

I would offer the following thoughts about friendship—sexual and otherwise—which are based upon my own mistakes and about which I’ll write in the first person:

It is important that I listen to what people say about their past friendships, because they will almost certainly behave the same way toward me—despite their insistence that they’ve changed.

I have always found that it’s a mistake to attempt to fix a friend even if she (so far, it has always been a she) asks me to.

I have had such bad experiences with people who are charming or charismatic that I’ve come to think of these traits as like fresh paint over rotten wood.

My worst mistake has been that I often mistook sex, drama, and intensity for intimacy. I have since come to realize that these things are usually destructive in the absence of commitment.

No matter how big and strong she makes me feel, I must never assume that I have the upper hand in a relationship with a woman because women have disillusioned me of that notion too many times.

I must never expect anyone to save me because they really and truly can’t, no matter how together they seem or how much they want to.

It is best to assume that other people are just as fucked-up as I, no matter how they appear.

Unless I am really intimate with someone, I must never ask him or her to give me more of themselves than they freely offer because they will almost certainly pull away.

The most trust that I can give to another person is to loan him or her money (I don’t mean just a few dollars for the sake of convenience), but doing so creates a lasting awkwardness in the relationship.

I can never know how someone is going to behave in a given situation until I’ve seen him or her in a similar situation—if then.

Most friendships are founded upon shared beliefs, interests, and geographical proximity, so I must be prepared to lose my friend when any of these change.

Even long-term friendships sometimes end, and I can’t always see it coming.

Having lost friends to death, I’ve concluded that it’s better to be more open, loving, and mature than I might sometimes feel than it is to be haunted by regret when it’s too late.

All friendships have limitations.

I know of no better gift than to take what my friend says seriously.

No matter how strong or prudent I am, intimacy is risky.
Posted by Snowbrush 50 comments: