Should certain women be removed from the gene pool due to toilet seat preferences?

But first, an update on my many travails. 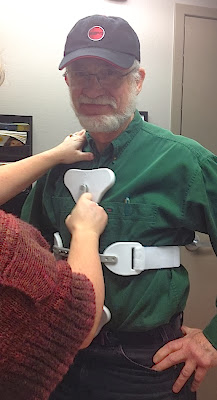 I saw the surgical neurologist (Chris) yesterday and found him unsympathetic and condescending (i.e. a typical doctor), although he seemed competent enough. He prescribed a brace (for which I'm being fitted in the photo), which he wanted me to start wearing ASAP. This meant that I had to initiate many calls to insurance to get the brace approved in three hours instead of the usual three days (one can NEVER simply sit back and assume that everything which must be done will be done, because it most certainly will not). Chris also told me to come back in a week, said that surgery might turn out to be necessary despite the brace (due to some “troubling aspects of the fracture”), and gave me a brief lecture on the safe use of ladders. In other news:

I learned from looking at the doctor's computer while he was out of the room that not only do I have a humongous cyst on my left kidney (6 cm by 7 cm), I have ten mysterious growths on my liver.

Peggy knocked a large mug of coffee off her bedside table and onto her cat.

The snow can’t melt because the weather just keeps getting colder—down to -7F, in fact, which is by far the coldest I’ve seen it during my 27 years here. Eugene is not a town that handles snow well either in terms of street clearing or the driving skills of its motorists.

I broke my thumb while using walls and doors to brace myself as I made my way through the house. The disaster occurred when I pulled against a doorknob with my left hand, before removing my right thumb from between the door and the jamb on the hinge side. The fingernail is blackish-blue, and the rest of the thumb is feverishly-red, grotesquely swollen, looks out of alignment, and hurts like the dickens, especially when I’m trying to sleep.

We can neither open nor lock the garage door, and Peggy won't allow me on a ladder to remedy the problem.

The kitchen sink stopped up night before last, the toilet last night. I WILL fix these things today.

Now, on to my question, which I’m especially wondering about at the moment because I can’t bend forward. To wit, in my experience, most women think men should lower the toilet seat upon leaving a restroom, and even go so far as to claim that men who don’t lower the seat are jerks. Because of this, and because we live in an age of unisex toilets, I always lower toilet seats, or at least I did prior to breaking my back eleven days ago. I never considered this a reasonable expectation on the part of women, but I did it nonetheless because it wasn’t important enough of an issue to me that I was willing to risk having some woman come screaming out of a bathroom throwing rocks and fecal matter my way because I neglected to lower a toilet seat. My question is this, why do women think this way? Wouldn’t it make just as much sense for men to insist that women raise toilet seats, even if they didn’t have a clue whether the next person who uses the toilet would want it raised? I believe that toilet seat positioning should be the responsibility of the current occupant, and with this in mind, I hereby declare my intent to proceed in consistence with my values even when my back is well, so if you think I’m wrong, here is your chance to straighten me out.

I’m now going to share with you something that I’ve never told anyone. I don’t know why this is, but Peggy sometimes leaves the toilet seat up, but only after I’ve gone to bed for the night, which means that I have, on occasion, myself fallen into the goddamn toilet because I didn’t elect to turn the light on at 3:00 a.m., blinding myself and making it harder to get back to sleep. While I’ve never actually heard giggles coming from Peggy’s bed when I fell in, I always suspicioned them, and the fact that she always laughed like a hyena when confronted with my sad story at the breakfast table didn’t allay my suspicions. When I asked her why she would do such a dastardly thing, she just said she must have left it up when she cleaned the toilet, a response that I considered more than a little lame, especially in light of the fact that she never fell into her little toilet mines. Having finally concluded once and for always that she was not to be trusted, I finally started putting my hand out before sitting to be sure there was something there to to sit upon. It’s a sorry state of suspicion for a woman like herself to impose upon a decent, hardworking, god-fearing man like myself, but such is life.
Posted by Snowbrush 34 comments: